What is the most important things for create a pvp build?

im new here. my build suxk for pvp build.
maybe anyone can help and explain about pvp build for me? what is the most impoetant things for a pvp build?

Well generally , defiant set, a decent amount of hp varying from 100k to 300k, some dmg and Dmg reduction . My build is very different as it deals insane dmg and low HP which is 37k HP. Cerebral Vortex as a defense so when people hit you, the torrents proc on them and you deal dmg and probably stun them.

Stun element because it stuns and it gives stack debuff. Up to 50% more dmg as well as the stunning. Also ice can be useful because it reduces move speed and Dmg of other players as well as potential frozen.

Stun resist to reduce amount of times you get stunned.

Lots of dmg reduction and balanced with high HP and decent dmg. Defiant is a good set because it gives you more dmg and Dmg reduction as your HP gets higher. Shieldwall as proc, skullshields, battle mage, toss, possibly enigma, earthquake or cosmic orb, earthshatter, a chest mythic and sanctuary to survive death and strike back.

High HP gets obtained by vampiric touch, a lot of epic HP affix, battle mage ,fauns gift with luck, plagued and even crystal hp%. Dmg reduction by shieldwall, possibly MP absorb depending on the build, defiant, skullshields for wizard, Equivalence and other ways.

I’m not really good with making those general high HP builds so it’s hard to help you there. All I can say is discover what works best and see how far you go. See what needs improving and keep pushing yourself.

You may need many crystals saved up to learn. You can also post your build if in doubt for improvement just in case. Good luck on your journey

thanks a lot bro!

now i know what should i build for a pvp build. sorry sadenglish

Yup. Also searching unique potentially deadly combos that have never seen the light of day in PvP and maybe possibly outrank the current meta. I already achieved that. Also save a huge bunch of crystals, have lots patience and learn as much as possible for DQ and PvP. There’s still so many undiscovered.

crushing blow will do

In PvP? Well I did see people use crushing blow recently in PvP so I guess so. I still don’t use it though but I see where you’re coming from.

damage. Like the old cliche, offense is the best defense. A lot of of players in pvp right now invests in defense affixes. It would be good to have the right amount of damage to take them down easily. Doesnt matter if they have 400k hp and all sort of damage reduction = ) but dont forget they can do the same to you. So, have 1 pvp character for offense AND 1 pvp char for a lil bit of defense build 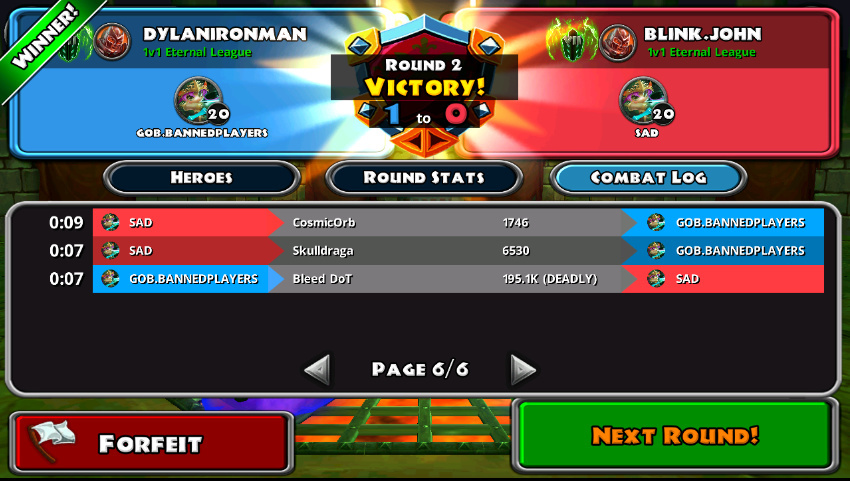 Yup I agree. That’s why my build is a very powerful offense build. It’s yet to be completed as AI form but in online form, it deals 100k or more DPS and the deadly strike gives me potent dmg. Up to 200k sometimes depending on the enemy. Even if enemy corner me, I can dispel and rip through them and wait. Even if they put lots of CV, I use a hot to dodge them
MP regen ftw also. Of course I’m using discordance orb chakram build. Hell even the reactors deal very good dmg. In dummy mode, up to 1.5M mil DPS max tops given some seconds and that dummy stands still. It’s why everyone can be defeated very well, even the toughest of opponents once caught cannot do anything. Also since I played arena enough, it’s so much easier to face enigma builds and stuff. Also GOB builds aren’t as good as they imagined them . That stun though. Even in ice mode ,it’s good even if it’s not the same as shock mode. Eternal root trophy did help of course. I did unintentionally add bleed as well but in some builds, they suffer greatly against A laughable 4% bleed chance. Since it’s very well done, technically I can use fire mode but preserverance would greatly nerf. Also it seems like MH weapon procs (excluding mythics) procs get effected by Discordance .
Cosmic orb helps with exposed mythic though and of course using sanctuary. I could use empyrean but that’s too risky to be worth it generally.

I cant help but laugh, Athena Chloe aka Emperador even bragged killing my AI in 7 seconds yet they have no idea at all how mediocre their builds are. They’ve got unlimited resources and copying and passing their build to their group yet they cant make a decent build

I chose the Discordance orb chakram build because of the 300% base for orb. That kind of build wasn’t explored in both PvP and pve so I did so. It’s very successful in PvE and my pve build got me to division 2 eternal. The PvP build is of course very successful as I said. I did get inspiration from cronos orb build but I think of how to solve it most of it on my own. It was a tricky build but worth it in the end. Technically I could use coat and stand there with orb for op dmg but i would be sitting duck. Well it’s 300% with the multi attack , extra attack and identity with push the limit as boost. Yes a wizard version of a Discordance orb build can be done in PvP like @Midlumer attempted but I personally think disc orb rogue build is harder to make. Now that I really understand how Discordance build works, I have other ideas to make underrated Discordance ideas possible. Also in general, I definitely gotten overall better at building after analyzing everything and testing anything out. Also the calculations.

To be honest, I could try using more push the limit since theres a push to limit cap but I’d rather not because I’d rather play fair and more than 1 PTL is a lot usually.

Thanks to learning a lot from cronos and well, everyone, it’s cool that I can just think of many build ideas , usually starting off crazy as first and try to solve it. It was a steep learning curve but it was worth it.
Searching for the unique and underrated things really is fun. That knowledge is not easily gained through pure trial and error and unlimited resources like some cheater have. @Mr_Scooty I especially thank for helping me adjust to the PvP as a rusty PvP player and giving me a new perspective on how to set AI good.

I did get a build failure too but in that failure, I managed to learn lots of crucial things that could definitely be useful in a future build.

Of course I don’t just use Discordance but it’s my favourite mythic for the moment. I do plan on experimenting with alchemy mythics and others too. Totally wish I didn’t missed season 2 and their vanities.

I was impressed with your build. It actually got me curious what affixes you got in there.
People are actually starting to copy it, I saw one GOB member with a reactor build earlier.
They must have gotten bored with their Terrashaper builds or they must have FINALLY figured out that they are wasting 1 Set Affix because it wont even proc that much when you only have 200k HP. LOL

I see. I for some weird reason shared it to crush and that happens. I do regret that but oh well. I do want to share it though because well, I already revealed enough in a way.

I think I should call my build Chidori or Emperor Palpatine Force Lightning or will of the force. Zeus is also an idea to use.

I did try an Discordance Aftermath rogue AI project but that failed though. It was to make sure I use enigma and stuff to stun them as well as taunt and cosmic orb/ earthquake and CV. Of course it wouldn’t work given that I only had 34k hp but it as a very good in 2v2 as an assistant. Still, I am reverting it back to my reactor orb AI defense idea. Main reason why is because I wanted to be remembered for the crazy dmg orbs in battle even before I plan to share my build.i did win an away chest or sometimes even 4 away chests depending on certain times. First time, I got 3 away chests as a prototype AI build . As an actual build in online edition without enigmas and all that stuff, discordance aftermath could totally be possible given enough resistance to high Dmg and high Dmg in general. Even meteors are potent if always aiming .

Yes a wizard version of a Discordance orb build can be done in PvP like @Midlumer attempted but I personally think disc orb rogue build is harder to make.

I don’t really think so

I think Wizard is harder since only 150% from Blast is available (instead of 300%) and Identity is not an option. That is a missing x2.75 damage multiplicator, or roughly 1/3 of your damage

just didn’t want to switch to Rogue because of you, I hate copy builds (mine is quite different, for those who don’t know our builds).

Fair enough. Still, your version is quite cool. Even your AI. Also wizard discordance seems more well rounded at least your version. I’m glad I helped you get to no1 and you figured yourself. Also glad you helped me sometimes.

Cuzeg Lad! Show all your enemy “NO MERCY”