For the perks. That’s the whole point. How else do you get 600+% extra eternal drop rate… amongst other things.

Ascending is all about the perks. In the end it lets you free up a little affix space, pending on your goals, I suppose.

If you’re all about PvP, it’s kinda pointless I suppose

In my opinion, the perks, ascending, are a farmer’s/ grinders type thing. That’s all. Helps get better loot quicker.

Read the description of each ascension perk. They describe what having that perk will give you.

There isn’t comparable as Dealer perk in this game, js.

The creation of ascension perk was to help the crafter/grinder on finding more valuable item. Since DQ was more focus on dungeon crawling before the arena arrived. 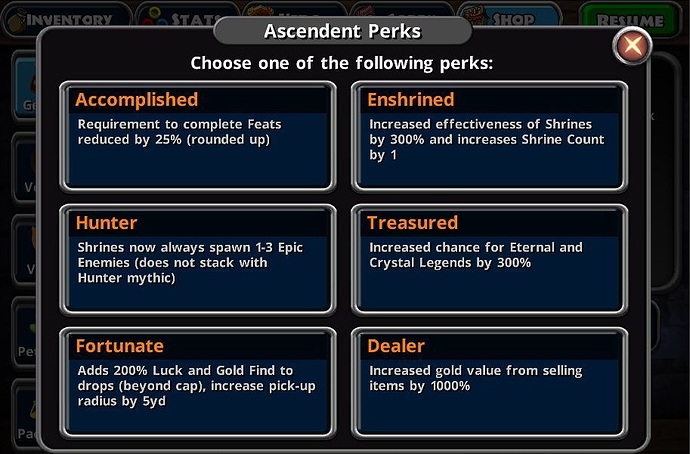 Ahh!! So I have choose Treasure that i could get an crystal legend gear with more attack than an normal gear but it don’t happen.

Making a farm toon is the key to success, salvage legends for dust, craft the right gears, Convert eternal useless items for crystals so you can increase luck / gold find, get epiphany ring on main and hireling (if you have 2 chars slots) so you can increase your gold - luck cap to 1012% (If you have fortunate perk).

Once you get a farming char built you’ll get things way easier.

Hello! Here is the build im using to farm with my warrior. What you get? - Max Luck% (cap is 1012) and Item Drop % (cap is 350) - Eternalized and Crystalline Sets - Nadroji Set with Nadroji 100% enemy rarity bonus (more rare enemies = more legends

) [image] But, you won't get maxed gold find. I felt it's not important becouse id does not change that much, and you have this new ascension perk that giv…

Theres also Fortune Bringer but for that you’ll need a hireling, its a next level farming xD

Hope that helps you.

when is the release of the new update?

Next year xD . Kidding though but I don’t mind if that were true.

The update is when the developers finish the work.

Lol. This is pure accuracy

next update patch is ready to go, but we are trying to track down one more issue before it gets released. I was hoping to have it out this week but we need to find a way to deal with an issue that is happening with in game ads.

Hopefully we can find a resolution and have an update released next week.

Take your time don’t rush things because it could create bugs. In Portugal we have a said: “Devagar se vai ao longe” translation Slowly you get far.

Is there a patch note released with the new features or just after the patch is live?