In order to add Barbarian or another PtL I think you might be considering using OH for one of them, which will leave you unable to Vault since there’s no way to get a bomb with Barb or PtL. Something to consider in case you use Vault during matches, I know it’s a handy escape method when you’re in trouble. Anyhow, you could always have PtL on chest & amulet + Barb on head. Luckily your Eternal pet has +MP or else you might be coming close to running out of mana within the first 20-25 secs of a match methinks, what do you think?

Also on the hat you have now I think you could reroll an extra percent or two onto your Crit Chance crystal affix with relative ease, if the RNG gives you some slack anyhow

He’s actually level 100 but I got the wrong pet image lol.

Also with barbarian and PTL, hardly ever run out of mana unless I press scalp and even then, the MP regen and MP on hit works and usually I kill fast enough before I run out.

I did use 2 crit chance crystal affix and 6 strength instead even though it reduces my overall crit but it’s because of obsidian and I don’t get CV chest easily for PTL.

lol that CV chest is an absolute thorn in my side. So elusive.

Regarding the MP issue sorry I actually meant your AI might be running out before the match ends if you set the distance to 90 yards on orb attack and if your opponent is waiting for it to run up before attacking, especially if you’re letting your AI activate Scalp

I’d just suggest testing 2x PtL & Barb to see how much you’d be eating up by the time the match reaches ~20 sec. but Im probably preaching to the choir here

I see. Well I didn’t out the orb at 90 yards but if I did ,it’s accident. Still I’d run out of mana if I cast scalp and orbs without hitting due to those changes as an AI I think.

Yeah both CV chest and ring are annoying as hell to find and sometimes the same with masochist helm and other useful gears. Also elements shield, rare legends sometimes, epiphany hats (not one has dropped in like forever),etc. That’s why I should focus on wiz×wiz pair, warrior×warrior pair and rogue×rogue pair to farm most efficient. If I make such a great farm build out of all of them, good for me.

You might as well call my build Yoda or Emperor Palpatine lmao. Any name that suits the Playstore but it shall always be known as the will of the force due to the great power.

Anyhow, you could always have PTL on chest & amulet + Barb on head.

You read my mind lol.

Also have you tried utilizing TimeWarp? The bonus could be huge especially if coupled with Cosmic Power

I’m trying out the build, those wizards with 200k+ hp and enigma shatter charge earthshatter are a pain

I can really see the value in your pet’s MP affixes, I’m running short of mana on occasion, well when I’m trying to vault away from opponents’ CV torrents mostly.

I also tried the CosmicPower addition but yeah it’s definitely bugged, TimeWarp doesn’t add a cent of damage when I’m attacking as far as I can see. What are your thoughts on Elements set? 21% chance to double cast your orb seems very powerful; but maybe it’s not worth it since the CD for orb is a bit high but other spells chakram scalp Vault could also be double casted, giving more orb Proc chances too

Yeah if timewarp added dmg to my orb, I’d be deal literally 2100%-3500% MH dmg to my enemies and you can imagine just how high the dmg would be. it would be like dealing 30k orbs or so with ease per 0.1 secs and Crits becoming say easy 100k and deadly become very close to 200k or so.

Also thanks for the elements set suggestion. Problem is the pet and I’d sacrifice HP as well. As cool as this pet is for a basically clear cast effect, it would be a hindrance to the current build setup but I like the idea. Elements+hunger. Then again, with or without glasscannon, I get insta killed due to the current meta. 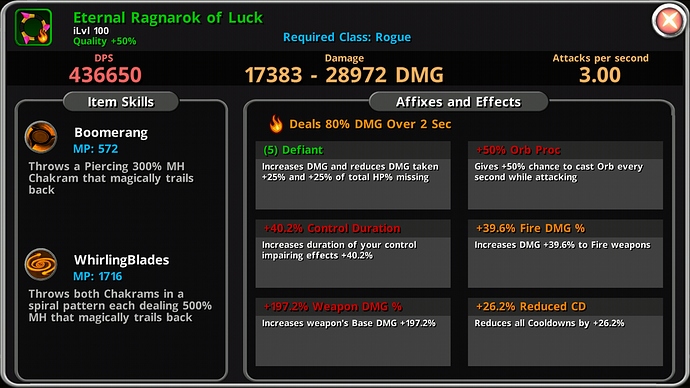 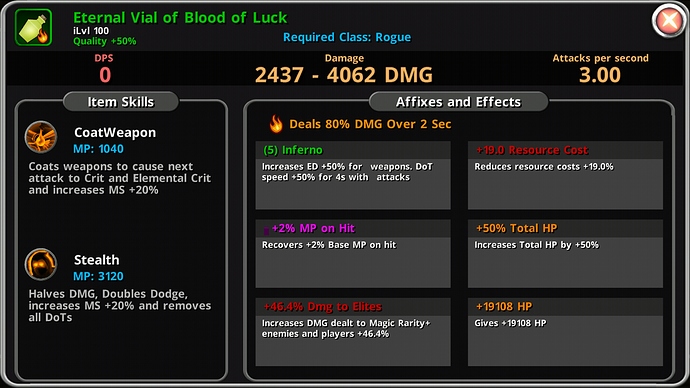 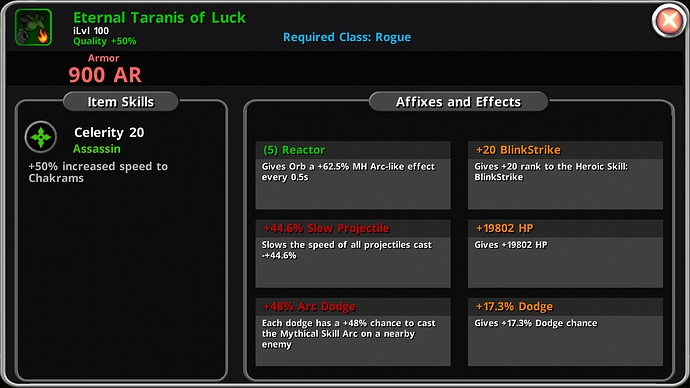 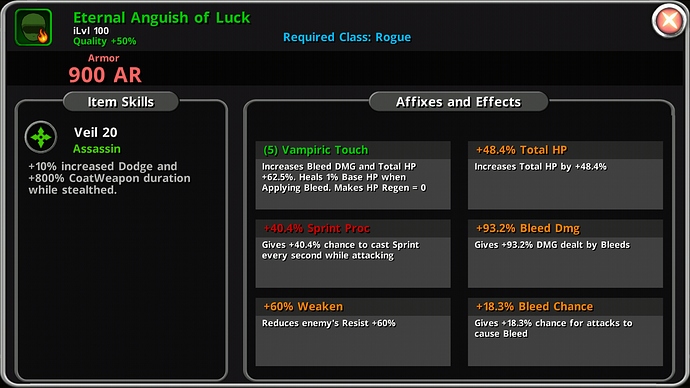 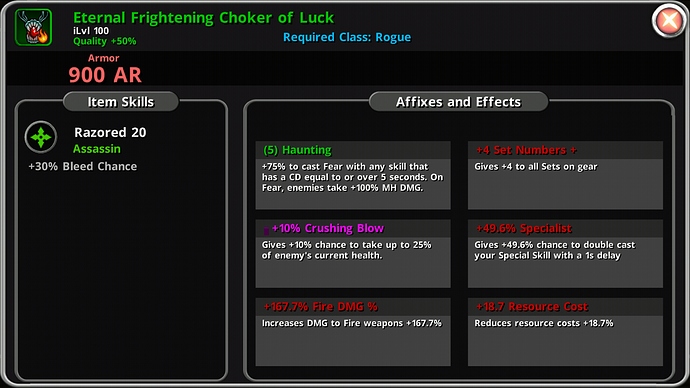 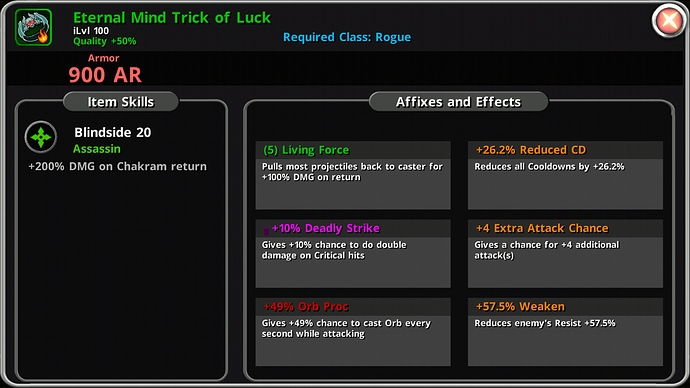 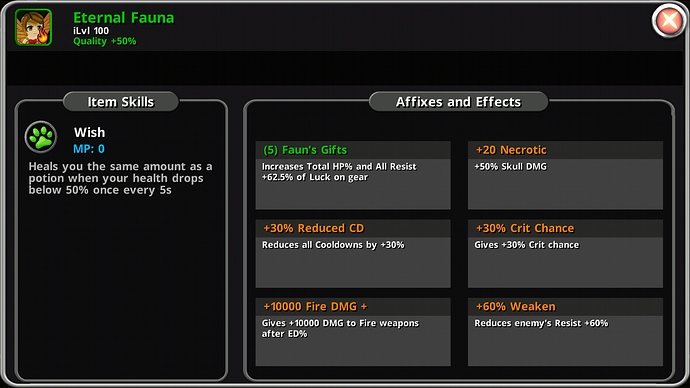 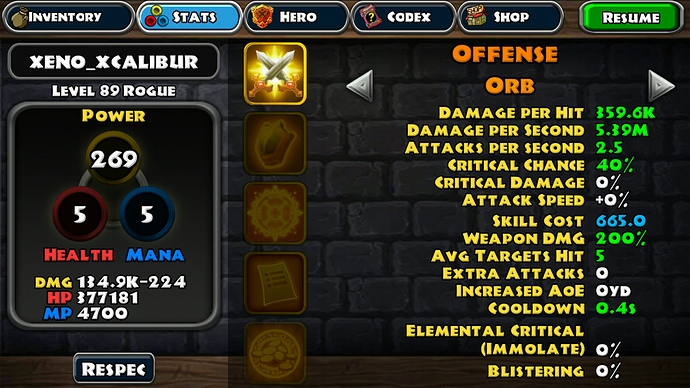 Well don’t you need discordance? Generally eternal build not recommended as you can’t edit it more than the gear you found. Also inferno isn’t really recommend with fire due to preserverance legend affix. Even then, I dealt crazy bleed though but that’s due to scalps powerful nature. Even stealth wouldn’t work at PvP but amber crystal doesn’t work on eternals unfortunately. Interesting build combination though. Not much I can do to help for that build other than using non eternals but if you seem to do very well in it , by all means keep it.

Still my orb build is very powerful due to the fact that I have Discordance and 6x ED. Also the affixes to be recommended are 1-2x PTL, 1x WD, 2+ extra attack Mythstone , 2 multi attack legend affix ,Reactor set, Defiant, Vampiric touch, Plagued, Living Force, Demonic and the Identity Set. Also add crit dmg and crit chance like we crit chance, 1x crit dmg with 6x strength nature of 1x crit chance, 5x death nature, 1x strength nature and 2x 53% crit dmg. Of course some HP and MP too. This is for non eternal build though.

I mean elemental crit and high voltage works or just stagger with high voltage but that’s up to you. I don’t need elemental crit though so that’s fine.
The build I posted is the easiest one as it doesn’t need the eternal MP pet I have and it can be replaced by a non eternal version and still be successful.

My other pet for this Will of the Force build is: 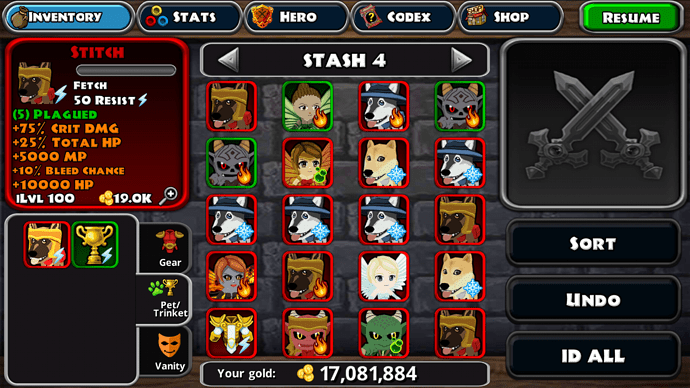 If you have a vampiric touch/plagued pet with HP and MP, that means one slot can sacrifice HP for another 1040 MP to reach similar amounts. No MP regen but that’s also ok . The crit dmg on that pet was merely a bonus as well as 9% total HP epic affix. It’s a very nice pet.

Why do you have arc in that combat log? I didn’t see any arc at your set

Reactor set. Also it’s really powerful and must have because sometimes orb can miss and the reactor hitting can help get hits in terms of dmg and stunning.

Thanks sir now ill understand your build up .

Do u have pvp warrior build up sir? Please teach me or wizard

Not really and I’m thinking of one. I’m not an expert in PvP but I at least have some idea of how to deal high DPS and or high HP. Show me your build in PM (invite /private messaging) and I can help you a bit better at least. For AI, maybe but I’m not that good at setting AI.

Btw, the only opponent I cannot defeat is Crush KO Si Pat and GOB.PH even with the hit frequency of 10 hits per second orb combined with twisters and cosmic orbs (although twister proc does improve my chances).

Whether orb is nerfed or buffed, I can’t defeat those two from the GOB and a majority do cheat. I’m wondering how they get such insane resist and HP at wizard class. Can they at least be checked though for their legitimacy. I don’t know how I can show of their pets or so but I did think they pretend to be legit. 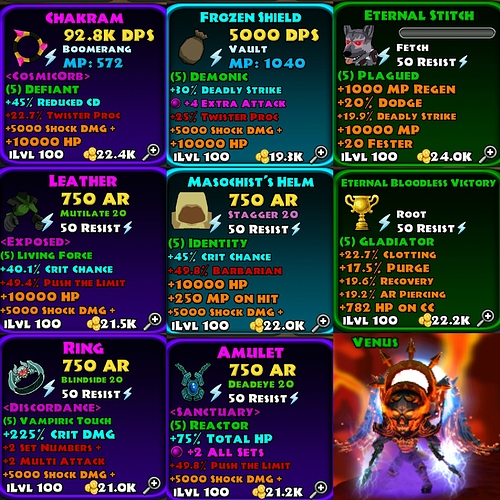 #Here’s the updates to the build.

I removed Elemental crit as I didn’t need it but keep stagger for stun. Added 2 more ED for total of 6x 1040 ED. Removed momentum and replaced with Demonic for that huge 60% boost when enemy below 30% HP which is easy. I could use relentless of course but stagger for now.

Also I removed high voltage as it didn’t really provide as much dmg as more ED , demonic , 2nd PTL and Barbarian legend affix.

If you’re wondering why there’s two crit chances. It’s because I tried to get another 53% crit dmg (225% in PvE) but on obsidian, it only gave me option for crit chance and also that CV chest was already a pain. To compensate, I had 6x strength nature. Sure I lost 10% crit dmg so I deal total of 116% crit dmg but that’s fine. My deadly have been crazy insane for a long while as well. Even so crush and Gob.ph difficult to beat and I suspect it’s because of resist so I may try weaken over reduced CD.

To do well with barbarian, I have MP on hit and MP Regen to help. I of course use scalp special skill to deal high bleed dmg and Dmg in general. I did manage to get 100k scalp deadly and same with 100k orb and twister , 100k arc in 2v2 or 50k in 1v1 and 20-40k dmg from cosmic orb occasionally. 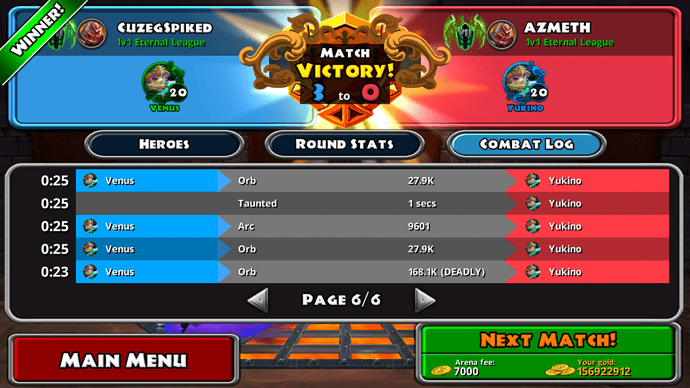 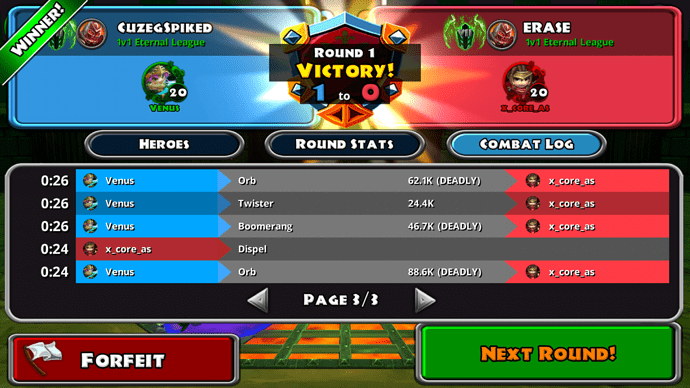 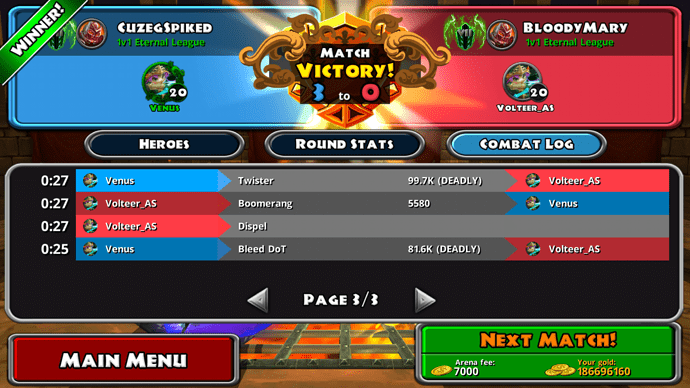 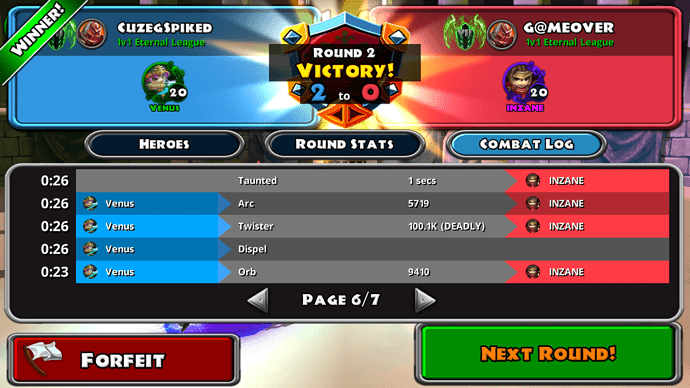 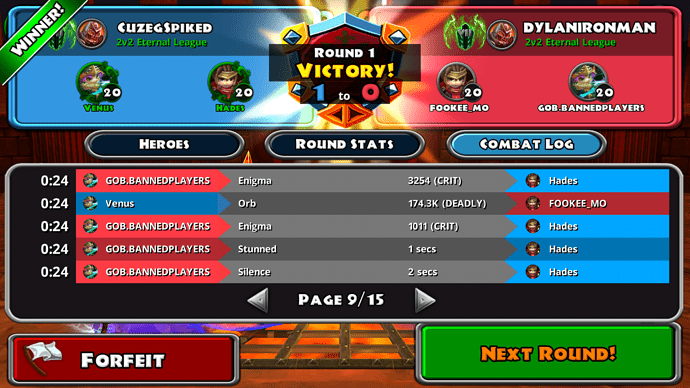 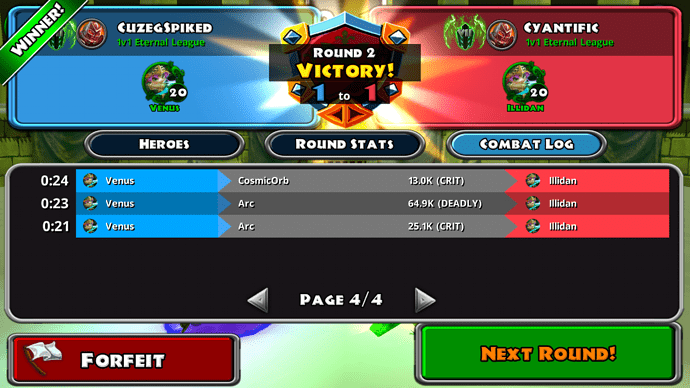 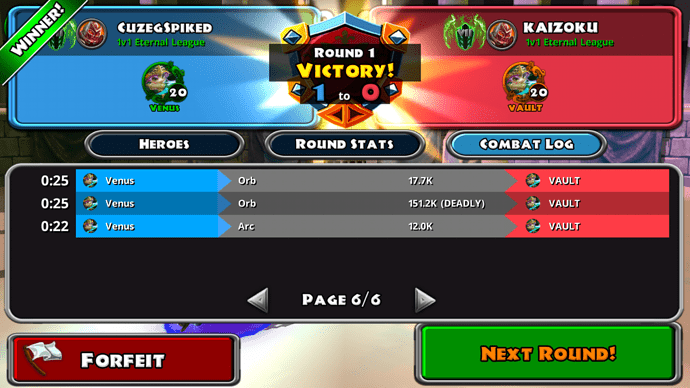 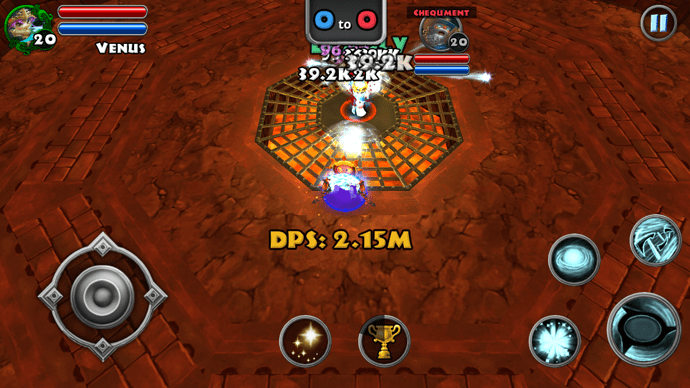 that’s now the trade off of having very low HP. That’s why I consider 100K the sweet spot
to give you enough time to put out more damage and not die.