Several times today and in the past several days, I will win an arena match but when the points begin to update it doesn’t finish. I end up showing victory but then end with the match 0-3 when the match was actually 3-0. This keeps bumping my rank down and takes away 29 to 31 points. Attached is a screenshot where I won the match but it ends up being a loss. I checked my internet connection and my download speed is 60Mbps and upload is 5Mbps. 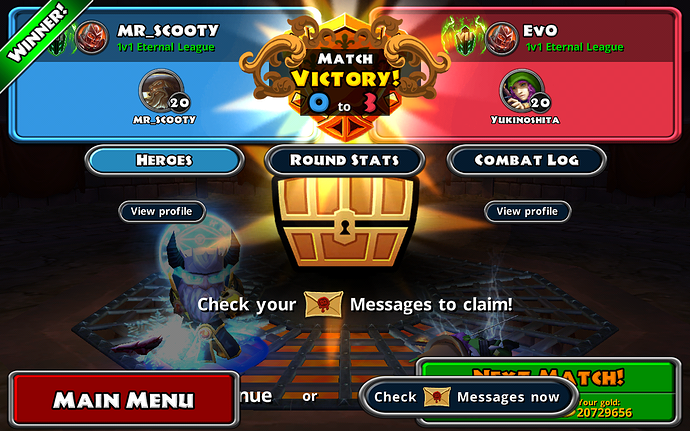 The battle arena has been behaving differently, for me, starting about three days ago. For example, I fought a character earlier and ended up doing 80k+ dmg in one of the three matches. The character had 800 hp and did not dodge or avoid damage etc. I ended up losing that match… Due to the different changes in the battle arena over the past few days, I ended up using 200M+ gold and numerous obsidian, amethyst, ruby etc to create a new build due to the BA behaviors. I dont know if @tdaniel can log into my account and check but something is really off in the BA for me. Thank you for any help or insight you can provide.

I am placing this post in the battle arena thread because I am not certain if others are experiencing similar issues.

I had another user mention this to me in email, but there issue was a little different.

Does this happen with every battle arena match you play?

When did you first notice this issue?

Are you playing with Wifi or cellular data to connect to the Battle Arena?

Thanks for any info you can provide, and sorry about this issue!

I don’t win and lose points every match.

Every match in the past few days has been extremely difficult, which is why I had to do another build. I am used up being in the top ten in my division.

I first noticed the issue when on Wednesday (I think). It was an immediate and noticeable difference.

I can’t begin to tell you how thankful and impressed I am with DQ and the DQ team. I have been extremely frustrated but I know you are listening and are here to help. Thank you for the hard work every day and especially for working weekends.

So I have spoken with a few customers and I have a couple issues:

Thank you for the quick response, research and testing. Is it safe for me to start playing again or should I only focus on pve for now? I sent an email to the support inbox also so sorry if I created redundancy.

I have that kind of issue also. It happens when during the match i loss Wi-Fi connection briefly. The i got the sane screen as you, with the 0-3 win and the usual after battle rewards in the background.

Mine was fixed when I migrated from 2.0 to 2.2 last week (Amazon user). I went from top ten in eternal division 1 to division 2. I’m trying to do ascensions and obtain gear to get me back before the beta season ends.

To be honest i didn’t played arena in the newest patch but that was the thing in the 2.1