Finally decided to craft it when I just realised that I can make a seperate ring with the hunter affix without interfering with my main build. I only use it when I am near shrine and therefore, its not part of my build. It works on shrines and shrine pools. Certainly really helpful for end game builds. 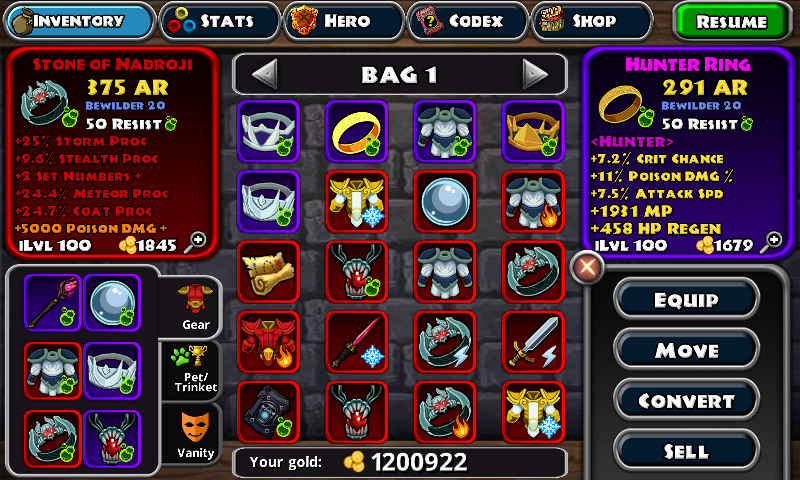 The reason why my robe isnt sureshot is because I am working on my pandemonium robe with maelstrom to fit with the build. I only use on shrine and shrine pools then take off for my nadroji ring for my ultimate build.

I got pandemonium robe was tempted to make a rogue proc build since I got an eternal catclysm and converted my vaccus bow to bombard. Result is, it’s like a combination of all procs raping monsters along the way especially the bombard+meteor proc. But, I kinda got bored with the low damage numbers I’m seeing. So I decided to make chakram build, Im kinda satisfied since I’m seeing 200mil- billions of damage now.

Maybe there will be something in near future… So you never have to wear a Hunter Ring anymore… Who knows?

I really enjoy the hunter ring

. Well if there was a feature to make me stop wearing hunter ring, what could it possibly be… I can’t wait to see what 2.1 will bring us.

Wonder when is new patch coming out anyways. Sure would love a ETA.

I’ve been hunting around for the date of the big patch and turned up dry. We looking at like a month soon or weeks here on it? Super stoked to see whats in it!

Oh and I noticed that hunter ring can spawn cartographers or enslavers or both at once but chances aren’t particularly high. It still increases the chance of finding one and thats always helpful in the long term. Obviously with monster spawn boost, theres 100% chance to fjnd cartos and enslavers and sometimes they spawn from hunter ring. Also epic enemies spawned from this have increased chance of legend, crystal or eternal legends and sometimes rqre legends. Extra gold too as well as extra crystal and mythstones ftw. Hunter ring makes all the difference. You don’t need to incorporate it into your mqin build worrying about wasting affixes so its best on a random rare ring or epic ring with 4 empty slots.

I think the next patch might happen this year or even next year and who knows, it cpuld appear on my birthday which is jan 11th or it could arrive late jan or early january.

What I’d like to see this patch is my hirling being able to wear a hunter ring and have it work. I made one for my warrior, whom I’m not fond of playing and to my utter dismay, it did not work. Has to be the main that wears it.
I was about to place a fortune stone in an awesome eternal weapon he Has but I’m afraid it won’t work either.
Anyone know what’s really important that doesn’t work on hirlings?

Might be a stupid question but what’s so good about the hunter ring? Is it essential for farming?

[quote=“CuzegSpiked, post:9, topic:4688, full:true”]
Oh and I noticed that hunter ring can spawn cartographers or enslavers or both at once but chances aren’t particularly high. It still increases the chance of finding one and thats always helpful in the long term. [/quote]

Anyone know what’s really important that doesn’t work on hirlings?

Hunter ring only works on main.

Luck / item drop / gold works on both main and hireling.

Might be a stupid question but what’s so good about the hunter ring? Is it essential for farming?

When farming it’s one of the best mythic to incorporate. 1-3 epic per shrine and rejuvenating pools.
Mythic feat will be faster to do.
100% eternal equip that can be use on a build or converted to a ultra rare crystal

Okay thanks. What’s the affix to go for when making a hunter ring? Also, do I need to max it’s quality?

You don’t need to add affixes or max its quality for hunter ring. Its best as a separate ring which don’t need affixes. If I were you, just use the ring whenever theres shrine and after shrines activated, switch ring with your main ring quickly. This is so you don’t waste an affix when building high end builds for pvp or campaign. It’s not worth wasting an qffix slot on the ring unless its a random ring that you will only use on shrine and nothing else. I never wear hunter ring all the time because its not necessary and just wastes precious affixes slot or power of build. Every affix slot is valuable and thats why my hunter ring isn’t part of my build. The point of my advice is only use when its necessary.

Hunter affix is useless in pvp and useless most of the time unless theres shrine nearby but after shrines are activated, there is no use for hunter mythic affix in campaign.

Okay thanks. What’s the affix to go for when making a hunter ring? Also, do I need to max it’s quality?

For Luck, Gold Find, and Item Drop between main and hireling, I’m pretty sure the formula is:
(Main’s Luck/GF/ID + Hire’s Luck/GF/ID)

Pretty much, if you know simple algebra, it’s the average/mean.

Oh I didn’t know that. I thought they really were there giving drops or the epic enemies spawned attracted enslavers or cartos who were near. Thanks for noting that they don’t spawn from hunter ring and thats another thing I learnt today

Made a hunter ring yesterday. It’s pretty awesome.
Well worth the time it took to make it. Heres a pic.

I am still trying to figure out what the last affix should be. Ignore resists is where i am leaning. What do you guys think? 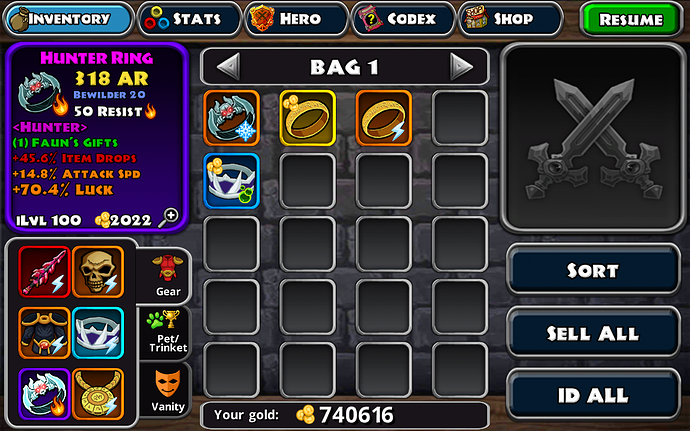