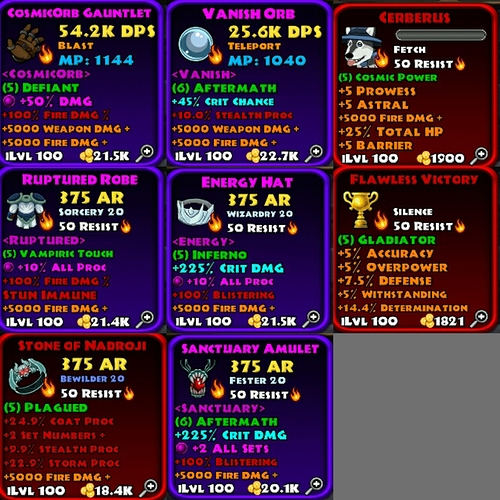 Defiant [3]: Yes please for 25 % dmg increase and the dmg reduction is meh but its still a must have. Also increasing dmg when hp go down is ok i guess.

Plagued [3]: Extra 3k HP (optional but nothing too special)

Vampiric Touch [3]: Extra 3k Hp, 1% healing which isn’t that relevant and increases bleed by 37.5% and this is a must have since this is a fire and bleed build.

Inferno [3]: To increase fire dmg by 30% yes please and speed up dot per second by 0.3 seconds. 1-0.3=0.7 seconds. This means when fire dot dmg happens, it makes bleed and fire dot deal dmg every 0.7 seconds. Must have for destroying opponent as fast as possible. After 2.1 seconds have passed, dot dmg can be dealt two times under a second.

Cosmic power [3]: Just there on my 5k ED cereberus but better off with affixes like Terrashaper for extra dmg. Also consider an extra inferno because at 4, after 0.6 seconds have passed, it can deal dot dmg 2 times in under a second when it goes to the 1.2 second and 1.8 seconds mark.

Gladiator [3]: Just there and best with bloodless victory for clotting and Ar piercing (eternal trophy version too) . I currently have flawless victory with silence which is all that matters and dispel.

Bombard/Cosmic Orb: Both are good but cosmic orb I prefer since it can travle in distance and attacks every 0.4 seconds I believe. They are must have to deal extra dmg. They activate for 30% proc but increased by 6%. 30%++6=36% chance to activate cosmic orb/bombard.

Ruptured: Must have because I would deal 50% more dmg once bleed is applied and I have dealt over 47k bleed dmg at one point.

Energy: Easy mana source because it goes up quite well when you use meteor skill and free 100% (double) dmg but it doesn’t matter whether it’s full or not because you will deal big dmg anyways. Helpful anyway though.

Sanctuary : Must have for backup because you are bound to get one shotted or sometimes mess up. This is like a second chance to strike back and win. Also works well with defiants dmg increase and dmg reduction.High stealth chance will ensure that you can survive longer because it removes dot dmg and lasts for 2 seconds so you can strike back.

2× 53% (225%) Crit dmg: My build mostly deals dmg in criticals from coat and the crit chance so it is a must have. I put the 2nd one as substitute for rage so I can have a set affix slot for another aftermath.

1× 11% (45%) Crit chance: It is there to increase crit chance by 11% which is ok i guess if coat doesn’t activate yet and it applies for dot dmg, meteor, shatter, cosmic orb and ofc the after effects of shatter and meteor.

2× 1+ (2+) all sets: Increase sets by 2 very helpful indeed for this build. One of them is elixir but it doesn’t matter really.

1× Stun immune: I am immune to stun and it’s so much easier to beat opponents like clogon and emman because i don’t have to use dispel to get rid of stun.

1× 9% (25%) Coat proc: 100% crit chance when it activates, 100% elemental critical chance for immolate to happen and then blistering comes along with it and this is also a source of bleed chance and huge critical dmg of everything for each part of an attack. This affects meteor, shatter, fire dot, bleed dmg and cosmic orb/bombard
Total coat proc: 9+6=15% coat proc

Wizardy 4 (20): Just there but doesn’t do much of an effect for elemental critical.

Bewilder 4 (20):Just because. Works with cosmic orb and sometimes activates but I dont rely on it,

Meteor: Main skill used for aftermath and big dmg. Deals 750% MH dmg. The highest dmg I have seen with meteor is 25k dmg.

Shatter: Good for getting to opponent and reset cooldown for meteor as well.

Orb: Must have in order to get to opponent. You will be screwed if you use other skills but that depends on how you use it.

This works against any opponent usually.

For blinkers, You can kill them as fast as possible and usually stealth activates fast enough when you teleport because of high chance. Bleed, fire, meteor and shatter with cosmic orb/bombard kills them and it is effective against even high hp hacker blinkers like meepawn which is why I was always 2-3 or 3-2 or 0-3 against him. Sanctuary will be a good backup as well. Coat is useful for this.

For clogon and his clones: Fear and taunt them. Stealth usually activates so its possible. The build will deal big dmg and maybe even one shot them. Sanctuary is also a good backup and the dmg you deal will deal big dmg to them. I rarley lose to clogon now. Coat will help too.

For guidedshot rogues: Just have stealth activate from activating meteor, teleport to them and shatter into them. Let them be helpless from bleed, fire, meteor/shatter and the possible vanish and maybe terrashaper if you have any. Also sanctuary is great as a backup to ensure that they die.

Tank builds: usually wait until energy is charged or so and keep hitting them. Since stealth and coat is quite high, this build can deatroy them no problem. I even tore a 200k tank in just a few seconds.

Flintlock spammers: do same as what you did for guidedshot rogues.

Enigma people: Do same as what you did for blinkstrikers

**: Do NOT copy this build because it wasn’t as good as it used to be but take some ideas and use those affixes/ideas for a 2.1 arena build.

I will show you my youtube uploads demonstrating the builds power before stealth got nerfed. The nerf on stealth ruined the build and the dmg decrease of the offhand. I might as well create new arena build for arena.

This guide is just inspiriation to make similar builds or make a new concept using these previous concepts.

8 Likes
The Aftermath Build [WIZARD GUIDE]
How to make the cooldown so fast or no cooldown on my meteor
DQ Builds Compendium [2.1]
I payed most of my £10 google play gift card to support shinybox
Will of the Force- Discordance Chakram Orb Reactor Rogue Build {PvP} Patch 2.5
Need advice - Aftermath build dying a lot!
CuzegSpiked February 21, 2016, 2:53pm #2

Sorry if these videos are long but this will show you how it works and my average streaks at the time. I used to have average streak of 10-20 but now i get 3 streaks because of this update.

Also other classes can try using these concepts and also consider that opponent will now have fear and taunt immune.

To use dispel in any build including this one, use dispel when you are frozen, blinded and other effects.

What like? 6k hp was alot back then for my build. It does still sorta effect tank build but not as much as used to be.

I was thinking of just using this build for campaign and just modify it to my own use for ascending and high floor climbing now.

Atm I am very busy to be in the arena and that so I will hold off arena until I can be free to donit again.

Thanks for advice anyways.

Yea and i forgot to mention that this build used to get first place many times and up to 3300 ratings.

Sort of. Final form is when I have terrashaper with 5k Ed (eternal if im lucky and maybe some hp for extreme luck) and eternal bloodless victory with silence. Basically it is very close to its final form currently. In 2.1, it likely needs a revamp.

It is far better than the previous builds I posted with aftermath. Also in campaign, it just works by dealing high dmg (a few billion in a few seconds) and if I add ignore resist or effective maybe and 50%+ meteor proc, it will be almost invincible except for death of accidental skyfall, tnt props easily and maybe enemy bolt.

Its way better in poison as well and could be an idea to make a similar build to green garden. A trillion dmg can last a few thousand floors like cronos builds demonstrated. Basically it easily obliterate mobs at floot 400, especially in poison. The cosmic orb hits everything (tnt props too) so it makes poison cloud trigger since coat proc would be 45% and I spam shatter. The enemies will then be effected by plagued very easily and boom, they are dead. Hunter mobs can be taken down somewhat easily as well and even the legend/mythic enemies. It insta kills mobs below 400 especially epics.

I could easily replace inferno, extra aftermath vampiric touch with druidic, something that adds high regen, maybe change energy to equivalence, something like that.

Also I could have a simple set up such as ice with frozen set affix and other affixes cronos used for hachimon but I don’t see much of a way yet. Either way, it is a really dmging build and could last til somewhere like floor 750-1000.

I haven’t tried ice with this build yet as well but it could work. The cosmic orb stun lot of thing because of bewilder. Free elemental crit from sorcery and coat as well as free crit. Just having 2 ed% and 100% elemcrit legend affix really helps. Also nature ed%. Stun immune is good as well but in campaign, it is rarly needed since I would be spamming everywhere and it would be rare for me to get stunned. Stealth and sanctuary can also back me up if stun happens.

Also in the last patch, it would have had potential to be someone like clogon but dealing massive dmg and very harder to beat than clogon if I knew how to make it. In new patch 2.1, maybe it would be an ok AI but ppl would be immune to fear/taunt/stun/blind immune maybe. Also it would take bit more dedication for it to work.

Ok a few billion is a bit of an over statement but it can do a few hundred million or close enough. In poison, it’s bound to deal a billion dmg or more.

my current aftermath deals only a few hundred million as of the moment, but with like 6 meteors per cast so i’m happy with it. congratulations by the way in completing your pvp aftermath!

I think with the 7x Fire Damage+, the damage bonus per affix slot is too watered down. You’d probably gain more damage if you change one or two of them to, I dunno, Deadly Strike or something. Damage to Elites is straight up 25% (max roll) damage increase in PVP since players are considered Elite.

I just got eternal flawless victory, I think I will try this build and try to improve it

Cool cool. Anyway I found out a better thing than 7 ed that do much more dmg. I learned because of hachimon build.

But if anyone else knew the scret of ed and ed% likr cronos, feel free to clarify.

There is no secret. Just learn the DPS computation ^^