After farming my way through lots & lots of floors, this is the method that has given me the best results. Just in the last few hours I’ve looted 2 Nadroji’s robes, 6 or 7 Nadroji necklaces & rings, 1 Vaccus Scipio, 4 Ragnaroks and 4 Insolences but it’s also good for Crystal & Eternal legends.

Helpful but not necessary:

That’s all there is to it! Within an hour you’ll have completed dozens of maps and killed hundreds of Epic enemies, likely looting you heaps of good drops. As an added bonus, you’ll quickly complete the feats to spawn Legend and Mythic monsters, netting you more good stuff.

Hope this all helps! Love you guys <3 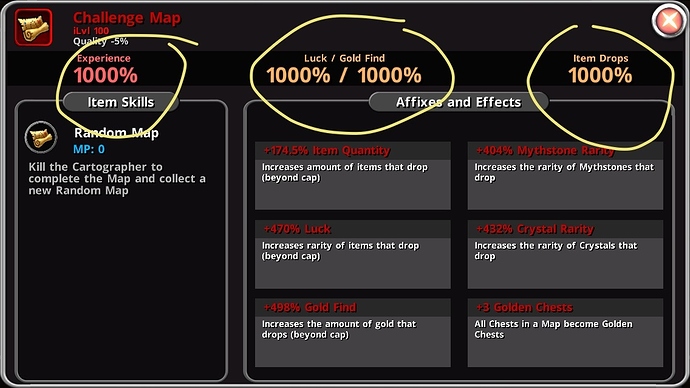 From what I understand, these stats only apply to the Cartographer’s chest, hence the higher rarity map you’re farming, the more likely you should kill the Cartographer.

The top gold and item find only applies to the chest. The legendary affixes apply to the whole map. This includes items not just from enemies but also the ones you get from Feats, Vendor and PVP chests. You want to save those maps for special occations like accomplishing they kill a Mythic monster feat. This will increase the quality of the eternal you get and give you a better average and higher chance of Crystal Eternal.

You can use Diamonds to reroll the map affixes to maximize the Luck affix if you wish. You can also use this to invrease your chances of an eternal Map via the same method.

For shrines they are most of the time on the right side of map in open areas or the end of corridor. That’s the best way fpr finding legendary rare items.

I’m new to the forums, but I’ve been a long-time creeper!

Does it matter if it’s a rare yellow map, or just magic blue map? Is there any “desired” preference?

Higher rarity map have more affixes mostly bad but there are some good affixes on the maps too. For example pack size, more rare/magic/epic enemies.

Higher rarity maps have better luck and item drop then those of lower rarity so they will drop more.

I’ve heard of green maps too?? Where do those come from?

Edit: Is there anyway to remove a socketed gem from an item?

Can you craft the set, Cerebral Vortex?

I think the base chance of getting eternal (green items) is 1%, but item must be legendary first (red). The same with maps. Green maps are the same as red but their affixes are 2x higher. You will eventually loot green map, it will be faster with Eternalized set and/or treasured ascension perk. 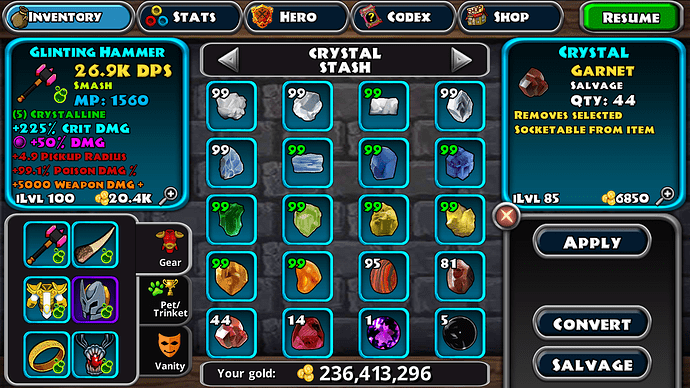 Thanks for the replies @Msiiek! I probably should have started my own thread, but since @JesusSaves has created this farming thread it does pertain to farming!

So the cartographers chest has an increased drops from the map quality% correct? @JesusSaves

Does using the Garnet crystal destroy the item? Or only just un-socket the mythstone?

Is there a range requirement for exp/drops If my hireling or dots kill a mob off-screen? I noticed that my ricochet hireling kills mobs offscreen, am I still getting exp?

When you say (Wizard) exclusive, or any exclusive item for that matter does that mean my main or hireling HAS to be the class? Do you get more class specific if you main, or have the class as a hireling?

Map stats (not affixes) only apply to cartographer chest I think but I’m not sure.

Using a garnet will remove mythstone (not destroy) and leave an empty socket in the item.

I think there is no range requirement to get exp/loot.

Class exclusive items can drop for other class but the chance is very small. Best is to farm with the class you want item for.

If you have wizard on hireling for example he will get wizard items.

Thanks for the replies @Msiiek! I probably should have started my own thread, but since @JesusSaves has created this farming thread it does pertain to farming!

–Glad it’s been helpful to you

So the cartographers chest has an increased drops from the map quality% correct? @JesusSaves

–As Msiiek was saying it seems that it is affected by map rarity, with the most chest loot coming from green maps and the least from normal maps.

Is there a range requirement for exp/drops If my hireling or dots kill a mob off-screen? I noticed that my ricochet hireling kills mobs offscreen, am I still getting exp?

–Your bullets do have a range but it’s pretty far. As long as they hit and kill the enemy you’ll get the exp and loot will drop normally

When you say (Wizard) exclusive, or any exclusive item for that matter does that mean my main or hireling HAS to be the class? Do you get more class specific if you main, or have the class as a hireling?

–You can change any item’s class requirement using Jasper crystals; this is particularly helpful for being able to acquire items that only drop for certain classes (I.e. loop of epiphany is wizard specific, use Jasper to switch it to Rogue or Warrior) and there are also Sets that are class specific like Momentum is warrior, so you can Jasper an item to warrior, use amethyst on it to roll Momentum, then Jasper it back to Rogue/Mage.

–Regarding hireling’s, as Msiiek said, if you’re using rogue and your hireling is Mage, you will rarely find warrior drops of any kind. In about 400 floors I think I’ve probably gotten 10 warrior items (since I use rogue and Mage hireling)

Not working for me. Epic enemies only give yellow and blue drops. Alot of epics coming out. I gkt some legends but it’s all useless legends. No sign of Narodji Necklace from floor 100-150. So unlucky I guess. I’m having a headache already. Sigh

@Callipse
Nadroji Ring and Necklace drop from Epic+ monsters in addition to having to be on the higher Difficulty settings, I think Epic or better. so if you are not seeing a lot of Epic+ monsters, it might take some time before you get those. Hunter Shrine, Hunter Mythic or Perk, finishing Monsters defeated Perks, Challenge Maps with Epic+ affix, killing Cartographer and Enslavers (they are Epic+ monsters) plus high Luck will improve your chances for getting Nadroji items.