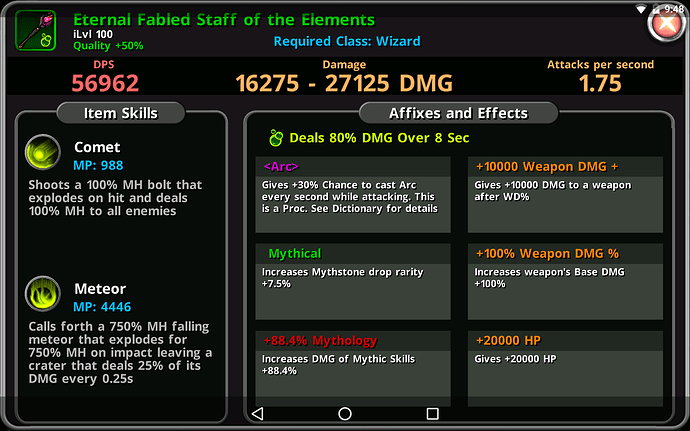 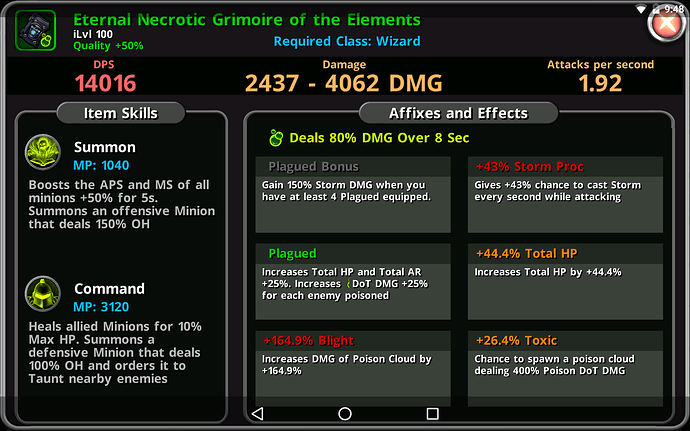 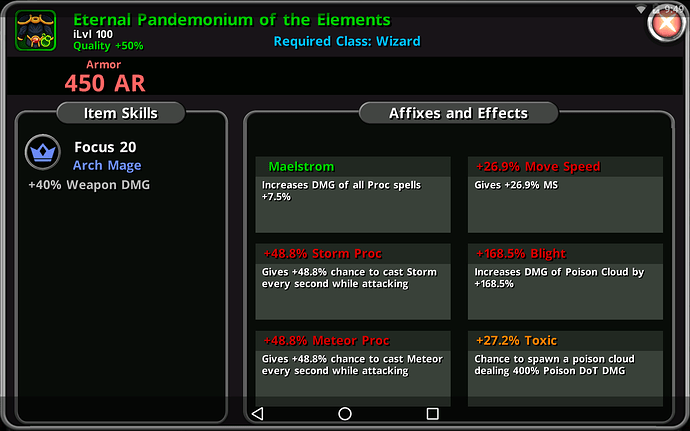 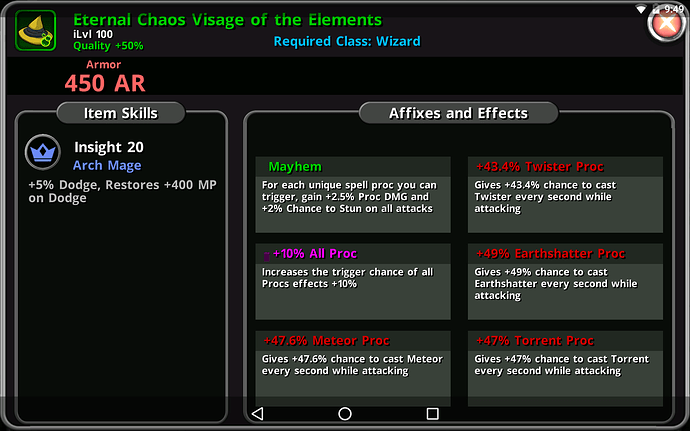 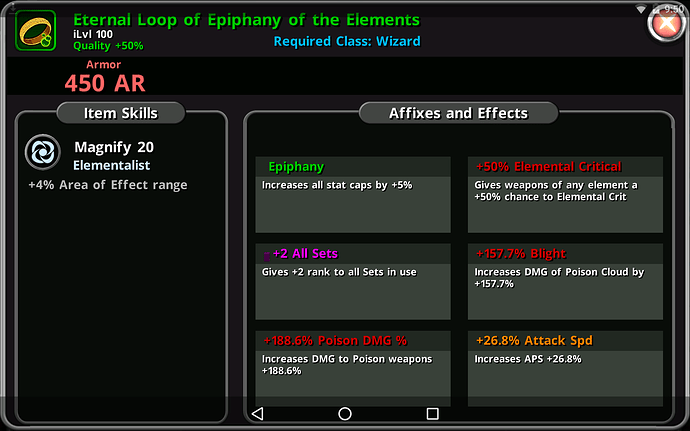 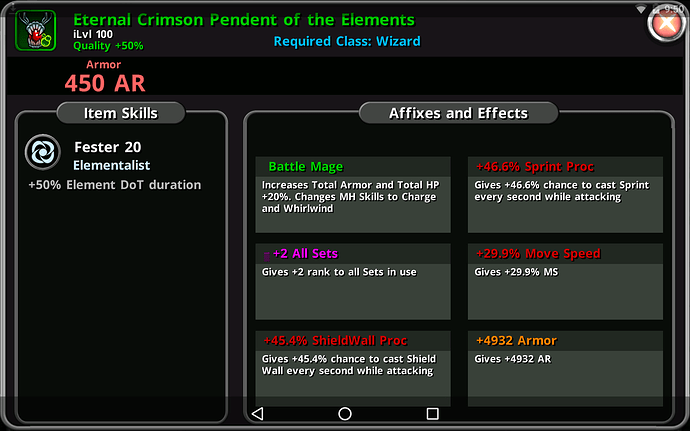 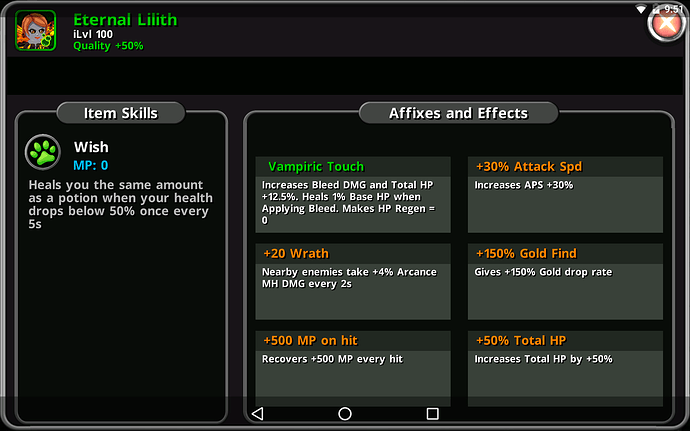 The Builds Focus:
Now since this is an all eternal item build I really wanted to highlight the cool parts about eternal items which is that they have doubled affixes and that this allows you to do so many more things with a build if one of them fits in it. This build is essentially a 72 affix build, that number of affixes is 30 over the norm, so what’s the best way too show off what can be done with 72 affixes in Dungeon Quest? Make it do a ton of Crazy stuff of course. You stuff it jam packed full of procs and other crap that just makes it play differently then anything else ever could so that’s exactly what I did the build is not meant too be good long term just fun and it definitely shoots for that.

Eternal Fabled Staff:
Weapons are some of the most important parts of any build and having your choice of affixes on them is incredibly key as well as I kinda wanted a mythic so obviously I had too go with a piece of eternal fabled gear for this

Eternal Necrotic Grimoire:
An eternal wrathful winter would be better I have no doubt about this but this is already a fun chaotic proc build that isn’t meant for super high floors so we wanna go with the poison element instead of ice because it’s green and this is the only spot we really have room too pick up plagued also the ability too use summon just adds too the ton of different stuff this build does

Eternal Pandemonium:
Procs are fun and an all eternal item builds is able too bring the number of them that you have and the amount that they activate too the next level

Eternal Chaos Visage:
Procs are fun and you can have it use the yellow hat texture aka the best hat texture

Eternal Loop of Epiphany:
You need too pick up some damage output somewhere as well as you need an open slot on the ring and pendant of any all eternal item build and this helps with both of those as well as lets me make use of some of the stats that would normally be pushing beyond their normal caps

Eternal Crimson Pendant (Rogue version):
Since this build is focusing HP and procs this helps out a ton as well as the Shieldwall proc and sprint proc help push this build too the hard cap on speed of 200% (base speed is 100%) when they are active

Eternal Lilith:
This is one of the few eternal pets I have and it has the most useful affixes in making up for what I am missing in this build

Now final notes: This is a fun build not a strong one if you randomly find all the eternals for it go for it but please do not farm for them just to make it unless you really want to

#I hope you all enjoyed the guide!

Green is not a creative color. 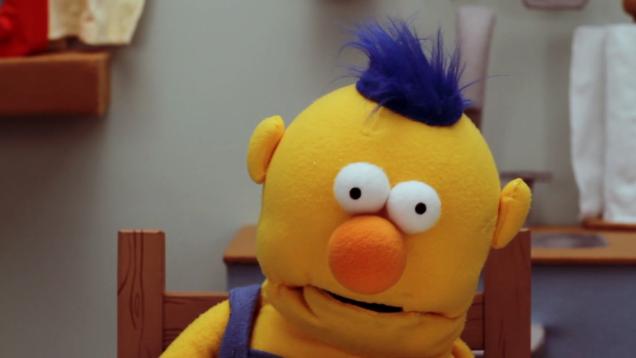 Man those procs would blast off my screen LOL nice build tho. Love the summoner + the elemental caster concept.

Lol too true it is not a build for the weak of phone and thank you!

Nice to know, thanks.

You cant apply ruby or obsidian to an eternal fabled? Only epic affix right? 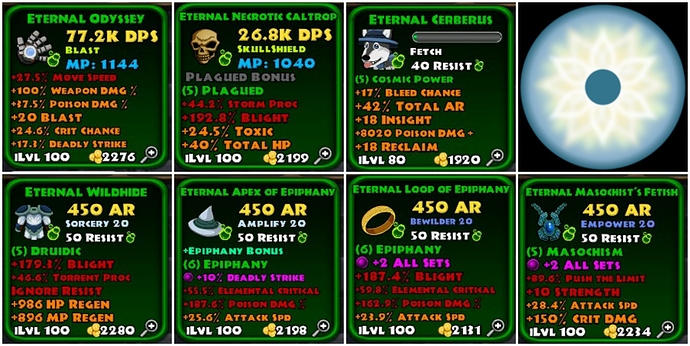 oh my??? why he has a mythic affix in MH weapon (eternal item).

There are 2 eternal items that allow for you too apply a mythic affix (6 if you account for the fact that they appear across all classes) these are the “eternal fabled gear” they come in hats and weapons. Once a mythic affix is applied you may add 3 epic affixes too them these will always roll perfectly

so thats affix is not a cheat?

Yes it is completely legitimate

can i ask the name of eternal?

It is an eternal version of the “fabled staff”