Good day to everyone. As what the title suggests, this is to reveal the build for the “Infinity Build”. Although there have been a bit of a leak of info or he actually discovered it… But who am I to judge anyway?

Few months ago, my friend shared me this build and we kept it a secret and he posted a thread showcasing the build without the actual breakdown of the build. And its quite awesome.
Refer to this thread: InFinity InFinity Build

We are not sure if he is somewhat related to the owner of the build or to any of us that has the knowledge about it. But anyway, the concept of the build is really the same.
Main concept: Frozen Explosion + Crushing Flames (atleast +6 or more). So I talked to my friend and we decided to reveal the said build. (Anyway, pro and veterans already received this build prior to this thread according to Seth)

Lets breakdown the build.
-Infinite Floor level capability
-Ultimate farming and flooring build
-Easy to build
-Not much of a high reroll build.

Key notes of the build:
-Have atleast +6 or more Crushing Flames set affix. This is to ensure thay smaler mobs gets killed instantly when crushing blow kicks in and this does not mind any floor level.
-Frozen (+5) set affix. This is good combo to the mechanics above. Since we can one hit every small mobs, having this set affix will amplify the damage output by having the explosion mechanic givem that the enemies are frozen. So we can easily see this:
Frozen enemies + Crushing flames : Infinite damage!!
-A little bit of Elemental crit chance
-30% Crushing blow is rough
-Offhand weapon shoud be Ambered to have “Taunt” Skill
-Mainhand can be anything.
-ELEMENT TO USE: this is important. Main weapon and offhand weap should have Fire and Ice. You can swap the element between the two but always make sure to have fire on mainhand and ice on offhand or vice versa.
-And thats it… No need to damage affix. No need for extravagant mythics. All you need is some survivability affixes or in my case i mixed it with farming affixes (Eternalized, Mythology, Crystaline, Item drops, and even “Natures” are fixated towards Luck:
-Any pet will do with this build

Footnote: this build can be built according to your need. On my video, I showcased the farming version of this build.

Owner of the build: Seth

Credits to this guy who discovered and shred this idea to us.
Visit this thread for his original thread: InFinity InFinity Build

What happened to jester? Its the wrong class pet and no set?
It should at least look like this: 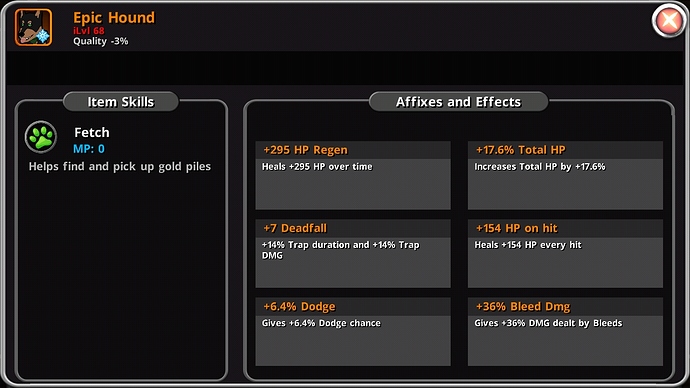 More room for improvmnt buts thenk for sharing you nice

Like it because I’m using a very similar builds. I have a theory about the nature called wisdom. Test it out and see if you can climb even higher

It has been tested above 10k floors tho.

Just two things, how does this build fair against ice maps where almost all mobs are resistant to ice and being frozen? Is there an affix in the build that acts like weaken but to elemental critical?
And i still never got an answer on this 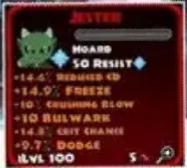 What happened to poor ol’ jester?

ice map monsters may be resistant to ice, but they are still affected by Freeze. I used Ice Element for a long time with Weaken for awhile and Ignore Resist on other Ice builds. add Frostbitten and Ice Monsters die just like any other Elemental Monster. I haven’t used Frozen Set yet, so I can’t say anything about that.

And i still never got an answer on this

What happened to poor ol’ jester?

He changed his name to Lester…?