My archer and warrior build at floor 250 *needs fixing"

I want to ask your opinion about my build. I got lucky with the chest. I got it for my warrior and cheated it for my archer using jasper. I ran out of crystals for rerolls but this is my build. 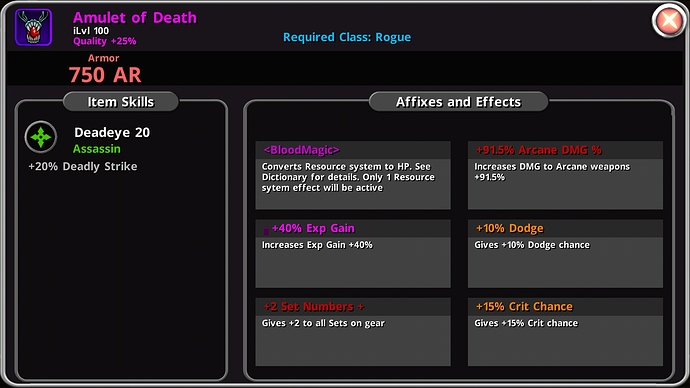 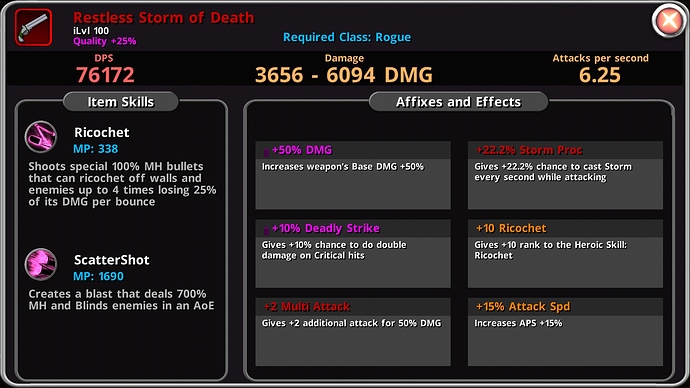 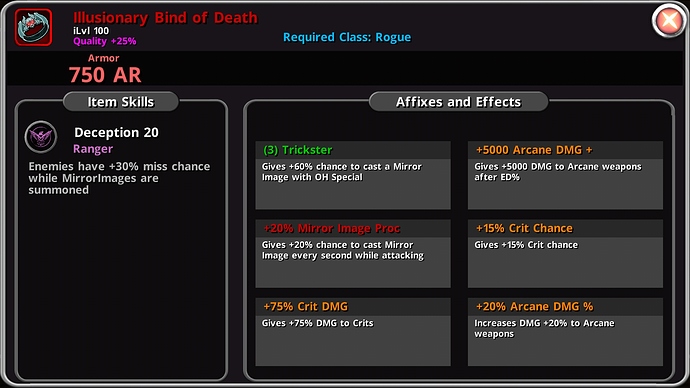 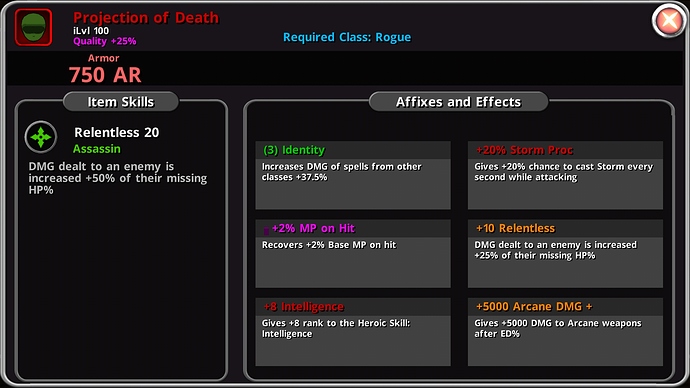 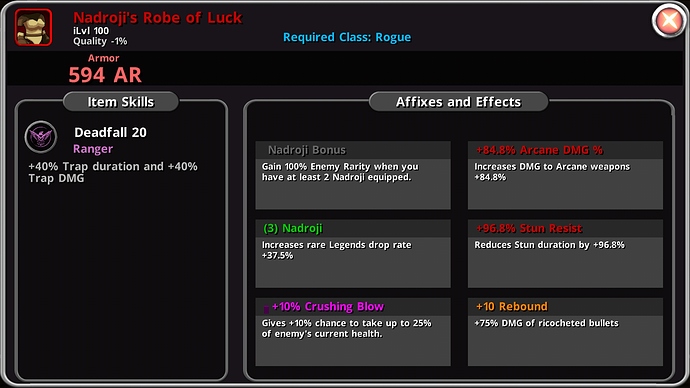 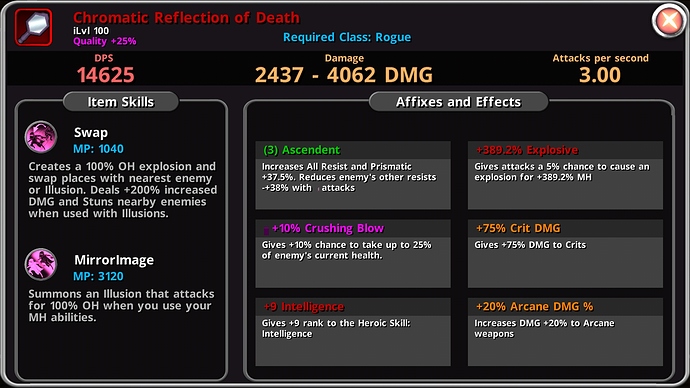 This is what I recently got from farming items. Should I got for this or retain ring? I really like the multishot but mirror proc is also not a bad affix. 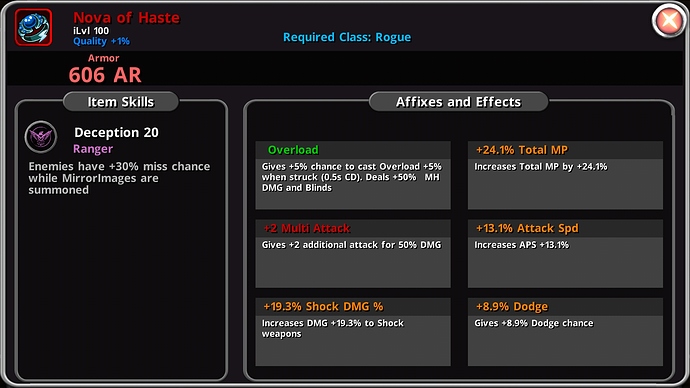 This is my warrior build, the amulet was from the archer and cheated it out using jasper. Idk if there is an amulet like this for warrior class. 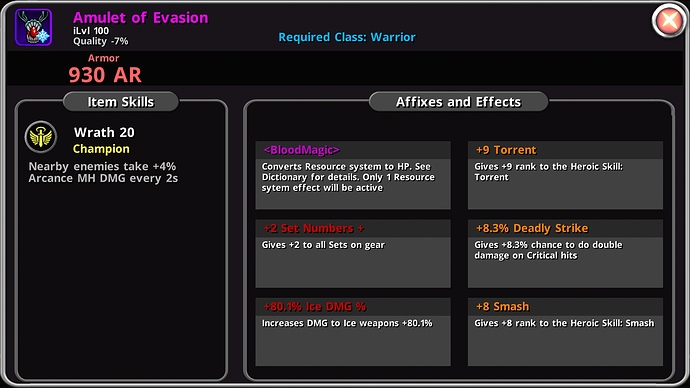 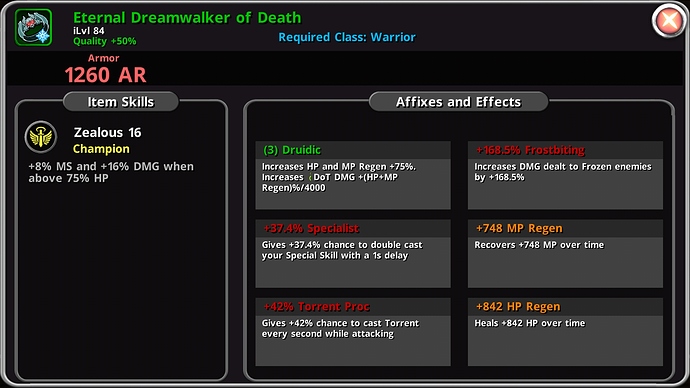 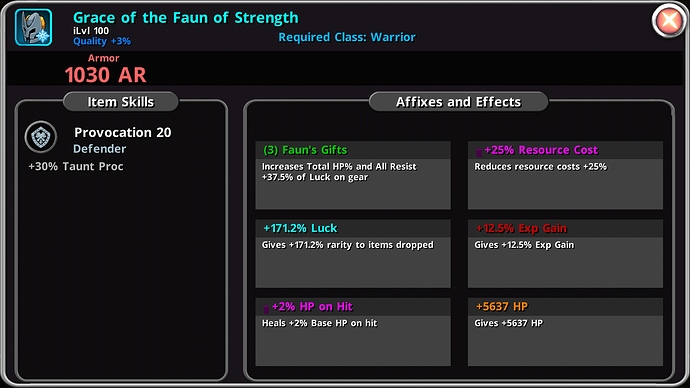 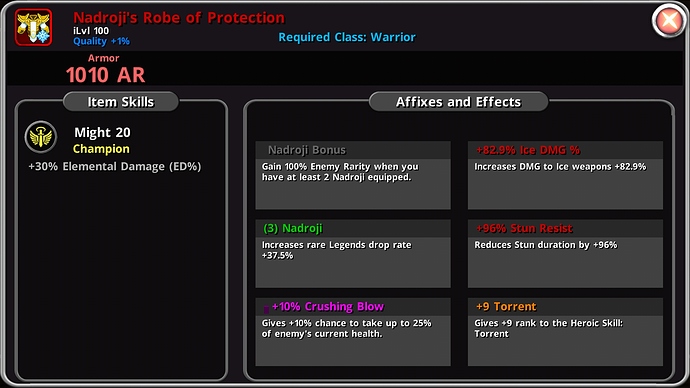 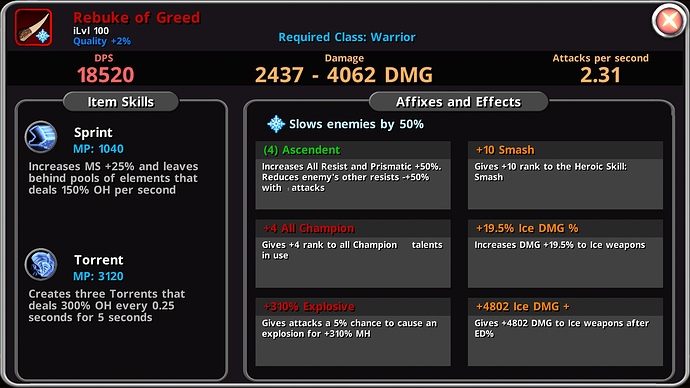 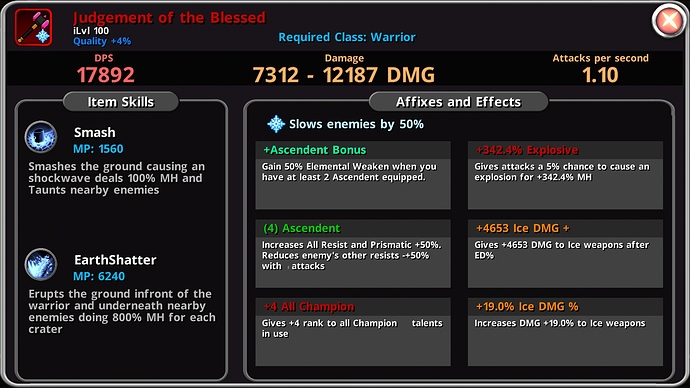 Im seeing improvements like majority of you affixed contribute to increasing your damage and im happy to hear you got out of floor 200. Congrats on getting Stone of Nadroji, abit more grind and you can get your hands on the ring. Neva give up!

As for your build for Rogue…
Id consider adding more Set Affix that increases your damage like Adventurer, Defiant, Pathfinder, Masochism, Buccaneer(if your build is Scattershot Rogue) and put only offensive affix on your mainhand.

Also 75% Crit Chance and 250% Crit Dmg will spike your damage output. But dont sleep on dodge and Hp for survivability

I see what you mean by *“needs fixing” . This may be obvious but make sure to have +4 All Sets on both characters so your sets are rank 5 instead of 3. So hopefully both Nadroji ring and amulet for an easy way to do it. Or adding Elixir Mythstone.

(-) Trickster: I’d personally use 25% legend Process for mirror images but for now keep if you want mirror image Procing. Saves set slot for more DPS sets. You also use a mirror image special skill anyway. Since you have that, don’t need it with this APS.

(X) +5 all champion or any all talents. +10 Intelligence. Not quite necessary, though maybe +10 strength for Bloodmagic and HP. Save some slots.

(X) Overload Set - only effective if you get hit but it would be better not to in PvE. Same with Stun Resist and such. Using SmokeBomb maybe, some dodges.

(X) Fauns Gift: Again same story, we would rather not get hit. HP increase is useful for Bloodmagic however but I’d reserve that set slot for more DMG.

(X) 2% HP/MP on hit, some 7500 HP affixes unless needed for Bloodmagic casting with fast attacks.

(X) Any 10+ talent or hero point. I’d only do that last, better save some affix slots. So no 10 ricochet, relentless or so. Can have on pet however.

Alternatively you can use Energy or Fury which will save on affixes needed to maintain resource pool.

Epiphany set for generally farming, but you can use in this too with expanding caps. More useful being Epiphany Bonus 70% DMG. Adding 70% attack speed is easy, even without the set, this counts. 45% attack speed, some haste nature and an epic 15% attack speed for e.g. Good for flintlock APS build.

For piercing, you can add 50% on chest and head with Zenith Mythstone but that’s only if you have. Skip if you cannot or don’t want to for Exposed Mythic with Flintlock.

Oh yeah and +25% Item quality with Emerald on both your weapons. Also including OH DMG with mirror image or horn. As that’s an extra 25% DMG according to DPS formula.

Couldnt have said it any better!

@Albelic can I interest you into making a pure Tank/Farm Warrior and the put all DPS into your rogue instead?
Get max luck then fauns gift, max gold and Satyr Spirit, Eternalize and Crystalline, Fortune and Pickup Radius. Also dont forget HP and Armor for survivability!

Hold up, still gathering my thoughts

. I know its tldr, gonna shorten it a little after this. After I have a good look.

I’m taking a note on this. My storm proc is for protection though. Any hit from anything would almost 1hko me if not killing straight away. The sad part is I tried getting the masochism affix like you have advised before using amethyst. Cried a river after I remembered that you can’t get rare set affixes using crystals after burning through my 9 amethyst.

Should I go for rebound or relentless?

As for the idea of using the warrior as tank, I already gathered those items. Although the warrior is still doing the bulk of dps in close range with multiple torrents. Epics lasting only for about 3 secs. So IDK. My rouge is still not that strong my highest dmg on hit that I saw was 4.7M.

I’m still farming for crystals and working my way towards the build that you showed me last time.

I’m speechless, I feel like this forum needs a double heart feature.

Those things you pointed out are really good. Most of those things you just pointed out I’ve been working out to improve but no idea what to replace. I personally like the trickster since It was a bunshin technique. The best mythstone that I currently own is return, so yeah… need lots of grinding. I’ve been doing 200-250 multiple times since any hit from anything even from those annoying worms would 1hko me past the 250th floor rouge. My warrior only suffers death from those thorns guys. I maintain 7.5m gold so I don’t usually respawn my hero if he died until 100k gold on his respawn. Thus, having a tough time before.

I burned my crystals just to get some of the items at +25% quality with my desired epic affixes. Those mythstones are expendable so I just chucked some on those items. I’ve hit some walls on the stat department. Like the crit and luck, 60% and 750% respectively. I don’t know how to bypass those but I’d love to hear tips if there’s any.

I’m leaning towards the frostbiting and other ice related dps since I already have the set rouge. I probably need to remove some of the affixes but I love the ice element on this game. I don’t have any idea what or how would I get my hands on the affixes like glasscannon, push the limit?, or barbarian.

I have 1300 dust at my disposal, I’ll try unlocking or crafting any items with those affixes and do some experiments. LordKnight did a great help last time on my post. You filled in the holes on my current build. I’ll try to post another thread about my build’s possible improvement. Mainly to ask for more advice but also to remind you that both of your advice made somebody’s build improve greatly if not exponentially.

Again, thanks for the advice, I’ll post another thread some time in the near future. @CrusaderX @LK_Stradmore

Cried a river after I remembered that you can’t get rare set affixes using crystals after burning through my 9 amethyst.

I’m still farming for crystals and working my way towards the build that you showed me last time.

My way of farming Crystal Stones is costly if you dont have the perk that increases gold gain and selling price. Convert Legends into CS instead of dust. Eternal/Crystal Legends yield more chance of obtaining Amethyst and Obsidian but much costlier. Ill show a build on my pure farm/tank warrior in a vid and lets check if how many legends can I get.

I did not save before using the amethyst. My phone is rooted tho so I can just use it to copy and pase the save file. Takes about 30 seconds to complete the process but I think that would work. I now have 3 amethyst so I don’t have problem on that department.

I’m just using my life’s rng rolls whenever I am using the crystals and so far I’m not disappointed. So I don’t think there’s any need to use the cloud or save file anytime soon. Though I would appreciate it if the rng gods would bless me with rarer mythstones.

My current gold reserves is at 10M and each of the conversion for legend+ is 500k+. That would cost me fortune. Lucky, both of my heroes are at lvl 99 so I could just ascend them and get the dealer perk.

Ps: Should I use my rubies now or later after I got out of floor 200s? I have 18 rubies under my name right now.

Here is the Vid of me just running around while my rogue just massacres everyone. 3 map runs, mythic 3 difficulty. 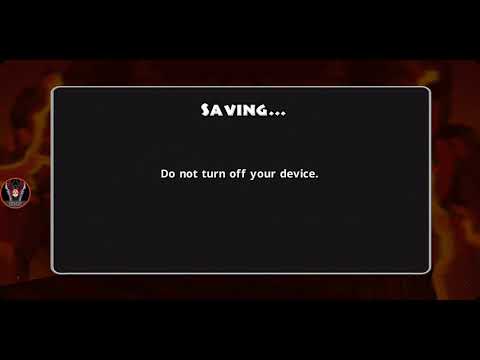 Here are the legends i got on those runs… 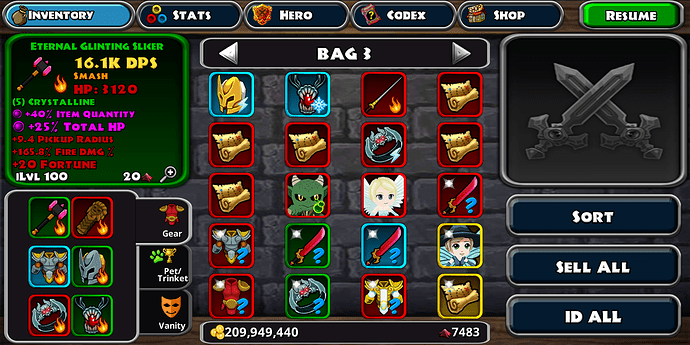 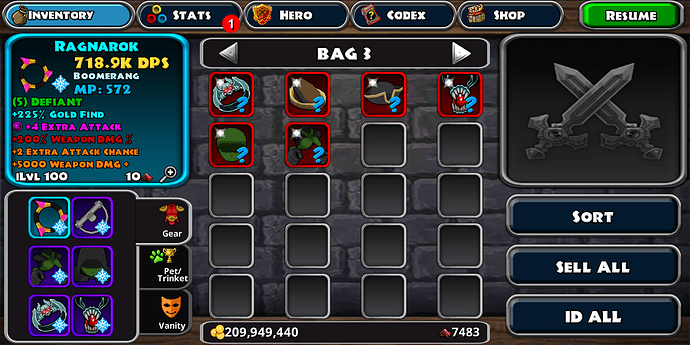 Ps: Should I use my rubies now or later after I got out of floor 200s? I have 18 rubies under my name right now.

Save them until such time that you will need them. Do you need to use them now?

Wait, that’s illegal. You can’t do that.

That’s cheating, you did not even use your weapon. 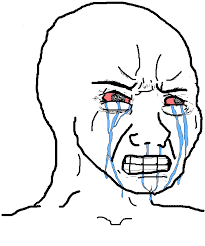 How can someone actually manage to reach 700k+ weapon dmg? Teach me your ways.

This is my current state, just got the necklace this evening. I tried using one of my obsidian to see the affixes it offers. A bit disappointing though since I thought the affix would always be at max if you have +25% quality.

The weapon jumped from 72k to 140k after changing those affixes. Also tried using the ruby and putting a mythic on my weapon.

The only thing that’s missing is the ring. Now I own a master mythstone which is nice. 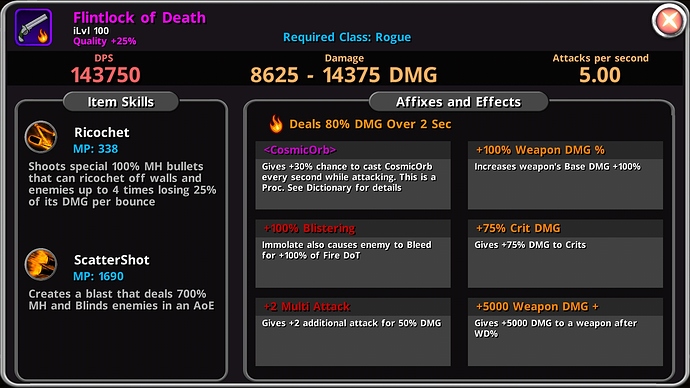 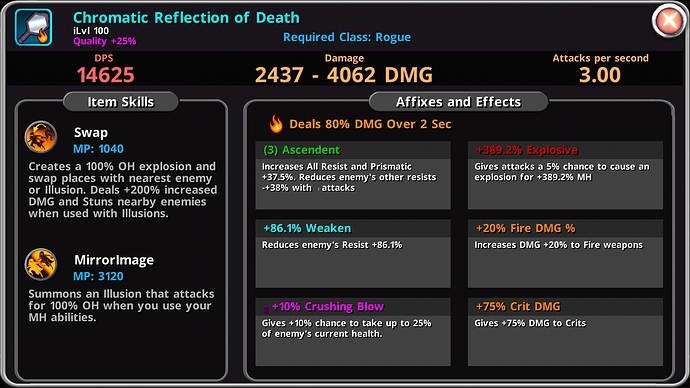 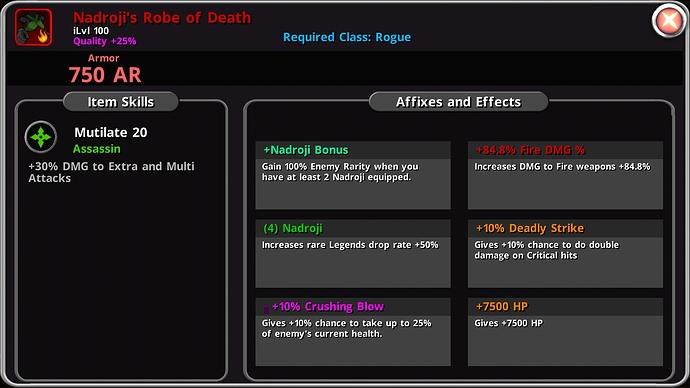 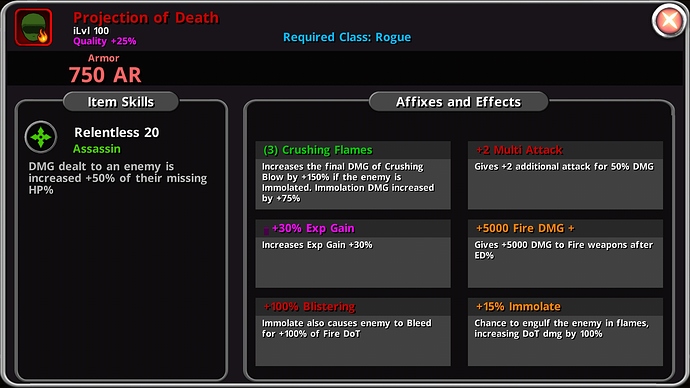 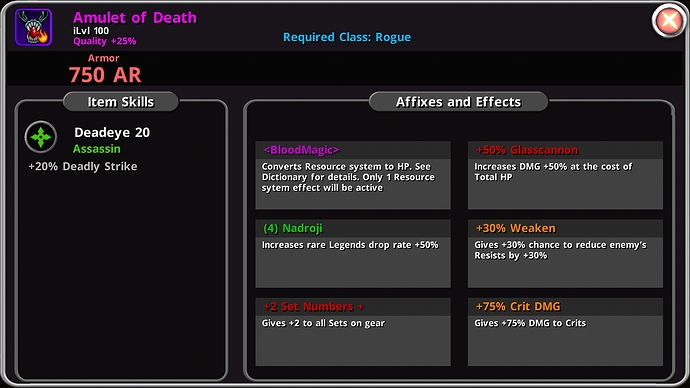 Which one of these pets should I use? 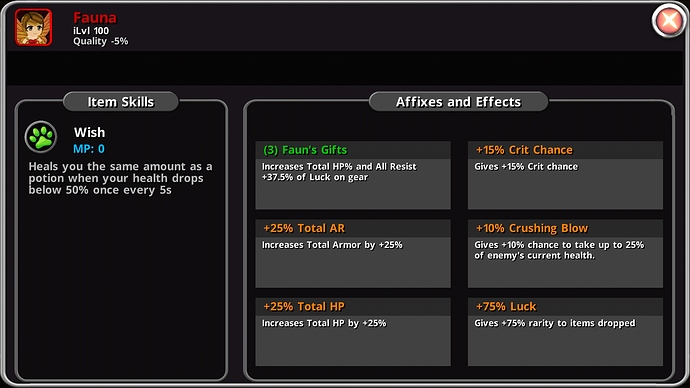 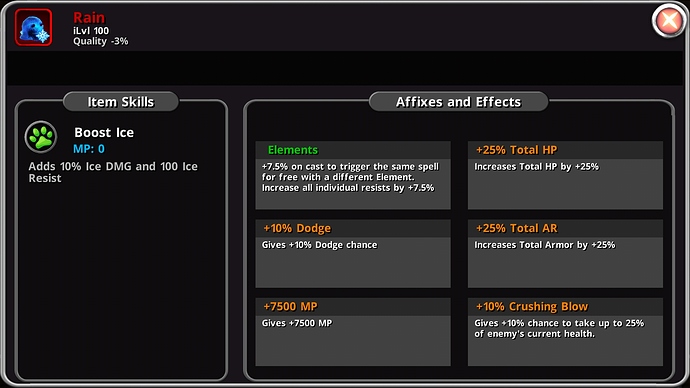 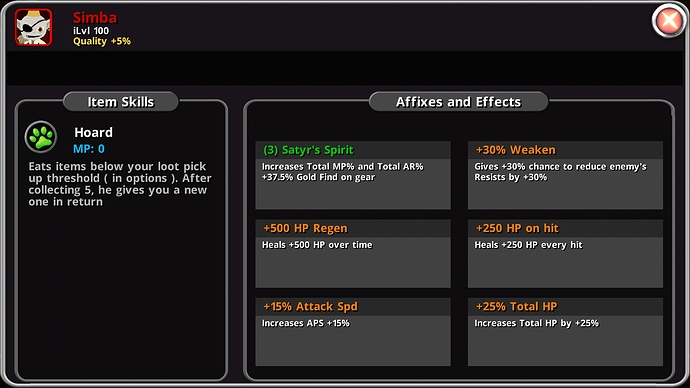 Teach me your ways.

Haven’t I already did? I mean I already shared my rogue build remember?

How can someone actually manage to reach 700k+ weapon dmg?

Thats because Chakrams have a very high Base Damage with a downside(which is you cant throw more than two of them).
Along with affixes that increases your overall weapon damage to the already very high base damage and this is the result. And with this in mind, Very high Base Damage Weapon + Very High Skill Multiplier like Scattershot + Affixes that will increase damage like Buccaneer = Massive Damage!

Try this guide I posted a while ago if you ever get a Ragnarok Chakram. Do not Copy Cyclone Mythic, get something else or not at all since my current Chakram has no mythic affix.

Haven’t I already did? I mean I already shared my rogue build remember?

I already have the pic and working my way to it, just meming.

Along with affixes that increases your overall weapon damage to the already very high base damage and this is the result. And with this in mind, Very high Base Damage Weapon + Very High Skill Multiplier like Scattershot + Affixes that will increase damage like Buccaneer = Massive Damage!

I tried testing my luck with amethyst if could get frozen but I ended up with Crushing flames which is also nice but Frozen is preferable. I did not try to dare and roll again coz I only have 2 amethyst left.

Try this guide I posted a while ago if you ever get a Ragnarok Chakram. Do not Copy Cyclone Mythic, get something else or not at all since my current Chakram has no mythic affix

That will be my basis for the scattershot. Thanks for sharing. I’ll climb up to 500th floor and see If could get my hands on any rare sets like defiant or masochism. And also those cheeky elusive rare mythstones.

I’ve got a 389% WD on eternal vengeance, a shield. What is affected by that wd%, the Mainhand or dmg output of the offhand?

Weapon Damage affix(+200% and +5000) on a mainhan for example will not increase the damage of your offhand and vice versa. But Elemental Damage on offhand affects your mainhand attacks.

Oh, I thought I could get a decent wd increase on my mh using that eternal. Thanks for the help.

Now my rogue can pull off 20B dmg with pistols. I still need to find defiant and masochism to replace my nadroji. The frozen build you’ve got is really cool.