I’m new to using obsidian and I was just wondering what are some tips on using them? Do I need to do anything before using them on my gear? I have no idea how obsidian works so that’s why I’m asking cause I don’t wanna mess up my gear or anything like that if there’s a chance

Obsidian adds a crystal affix (which is around 3 times more powerful than normal affix.) You have to choose between a list and you can’t go back if you dislike all affixes

Take any unwanted affix of item before using one. Gives you more choices as you cannot have a crystalline version of (e.g. Block) if you already have epic block on it.

I was recently asked about how to use Obsidian in a PM, and decided to do some of my own tests (oh!!

my Obsidians are fewer now!!!) and answer in the Community Forum. it is best to use Obsidian on a Legend Item. when rerolling affix stats on a Legend Item, the values normally wont go below 75% of the affixes max value, which makes it easier to get the higher or max values. non Legend items, even with +25% Item Quality, will give you a random number from the minimum value to the highest, s…

when using Obsidian, if you don’t get one of the choices you are looking for, try to pick an affixes that you think you might want to use in another Build, so you already have an item with a Crystal affix.

using Quartz is the only way to remove a Crystal affix from an item. but this is a very bad idea. Quartz removes a random number of affixes, so if there is an affix you really don’t want to lose, then it is better to just use an Obsidian on another item.

better to choose a Crystal affix you don’t want and convert to an Ultra Rare Crystal, or chose an affix that might be useful later. at least you are getting something, instead of just losing an Obsidian to keep an empty space on an item. Obsidian is something you don’t want to waste, unless you really want to convert to Amethyst to get a Set affix.

Sure, but if you have modified items,maybe mythic items, used a few rubys and need at least an obisdian affix it would be better this way. Obsidians are easy to farm.

I rarely find myself in that particular situation. what I try to do is plan out which 6 Crystal Affixes I need. and an item like that gets first Obsidian, so that all 6 choices are available for a hard to lose item like the one you are describing.

the thing is, even closing down the game and restarting, you still lose the Obsidian. if RNG is being mean to you, you still have the item with no Crystal Affix and need to farm for more Obsidian. I just used 6 Obsidian to get the Crystal Affix I wanted on the last item for my Build. I chose affixes I can use in other Builds and saved 3 of the items. the other 2 ended up with Affixes I don’t really use, and just converted them to Ultra Rare Crystal. and of course, the last one was the one I wanted!

a person with a good Farm Build that can get lots of Obsidian doesn’t need to close & restart the game. and I don’t know about other players, but I would find it frustrating if I had to close the game and restart it every time I wanted to save an Obsidian. 5 times on that last item.

and a new person only has a few Obsidian, so if the rolls are bad, no matter what they do, no more Obsidian until they find another one.

Sorry I’m confused about ultra rare crystal so how do you get an ultra rare crystal? Also how do you get a light blue affix on a purple armor or weapon? I’m new to the game so I have no clue about this stuff. I also have 2 obsidians right now and I’m trying to somewhat copy a build on this forum so I’m just trying to figure all this out cause I’m lost lol. Also I don’t wanna do the restart thing cause I feel it’s a lose on the experience of the game so if I don’t get what I want then I’m the type to just accept the fact of bad luck and farm to try again

Yeah I would call it as a ultra light blue affix. Best way to get obsidians , rubies ,amythists etc is to gamble unused eternal items into ultra rare crystals for 500 k money. But if your build is high money build find its pretty easy.

For example take this item 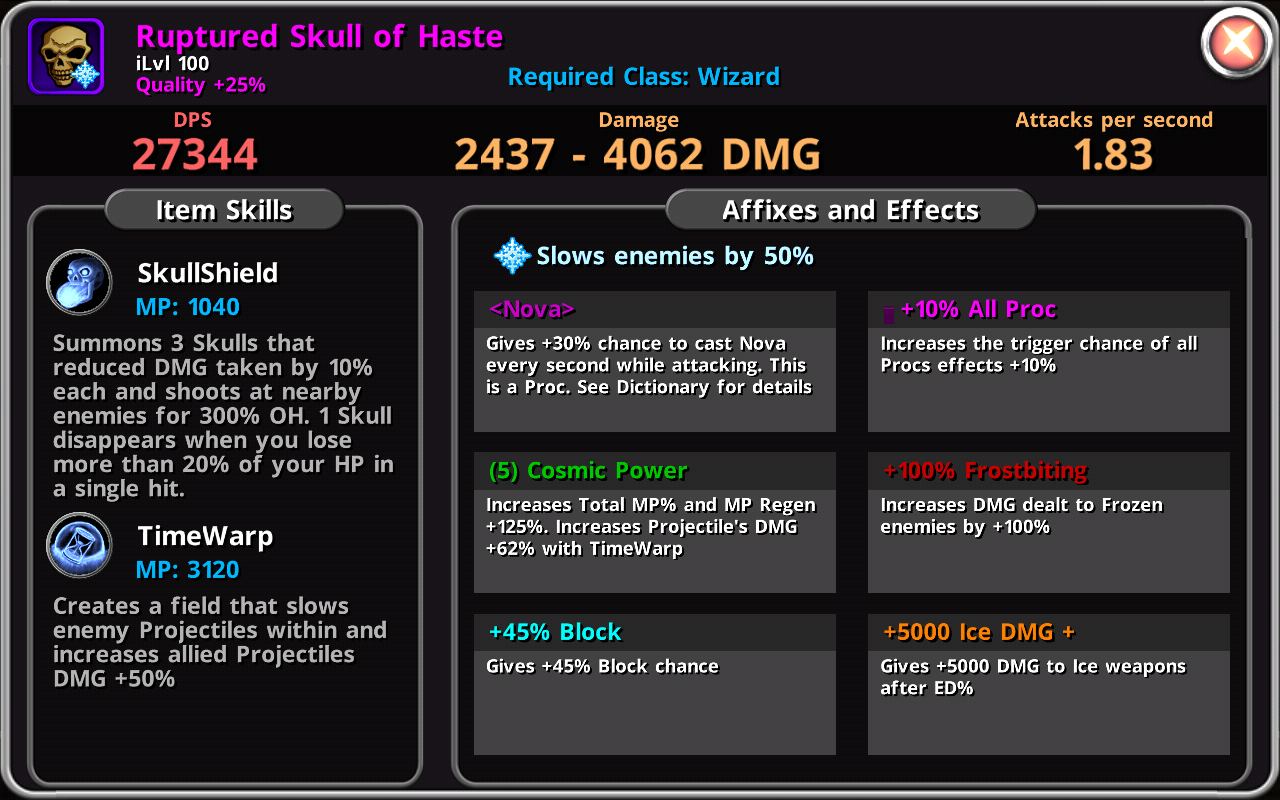 Screenshot_20190527-212955.png1280×800 198 KB
The block is from obsidian , the frostbiting from using ruby, the green set I got from using amythist and the orange ice damage from topaz. You can only have one light blue affix per item

I see @Golem is busy replying. In the interim the purple bits are made by using mythic words and mythstones. Check codex

Crystal Affix: these affixes are a Cyan, or light blue, color. you can only have one on any piece of Equipment. you can use Obsidian Crystal to place a Crystal affix on an item. a Legend or Eternal item can be found with a Crystal affix if at least one of the affixes is on the Crystal Affix List.

Block can only be rolled onto OH Weapons, but can be found on some other Warrior Legend/Eternal items except for Neck Items.

all Crystal affixes are triple values of their Epic affix versions, except for MP & HP on Hit, which are only doubled.

Ultra Rare Crystals: you can find them as loot. Legend & Mythic Monsters have a little better chance of dropping them. farming floors 400-510 of any difficulty level also give better chances of dropping URC’s. farming with Luck +650% or higher increases your chances of finding URC’s. using Crystalline Set can improve your chances of finding URC’s. spending Gold to convert lower Crystals to higher Crystals can get you the URC you are looking for. spending Gold to convert items up to Legend can give you a small chance to get a URC, and spending even more Gold to convert Eternal Items is guaranteed to get your a random URC.

this can make Crafting a Mythic Crystal Item a little tricky.

if you look at the item @dickwad just showed us, if he had found the Ruptured Skull of Haste with the Crystal Dodge first, he would have to take off at least 4 other affixes to make the Nova Mythic. some Set & Legend affixes can’t be rolled with Crystals, so if he had the +45% Block, +200% WD, and Defiant, he would have to choose to take off the WD or Defiant if he wants to keep the Block and add Nova. now if he wanted to put the Nova first, and then add Block with Obsidian, he could do that, but most players don’t like taking that chance, incase Block isn’t one of the choices you get, which can mean you end up wasting an Obsidian and Myth Stones. if you have the Myth Stones to spare, then this isn’t a problem. unless RNG makes you go crazy with bad rolls.

As @Golem pointed out it uses a lot of hard work. Now check out liedlers lance . Jasper it to every class. Let your imagination run think if you drop one with a Crystal affix. I’m too lazy in arenas or game play. So look

Sword = Hammer = Dagger. Steigers Fortune is a Wizard Sword with only 4 Farm Affixes, one Socket, and Move Speed. it can be switched to Hammer or Dagger with Jasper.

any Legend Item with Luck, Gold Find, Fortune, Item Drop will be very helpful as a foundation for a Farming Build.

all classes have a few Legend Farm Items. they kind of suck when it comes to killing monsters, but that just means you have to do your own tweaking to make your Farmer tough enough to turn monsters into loot!

Sorry for a very late response since I’ve been busy but i did some testing to learn from what you guys have said and I’m pretty sure i learned what i needed to learn about making my own gear at least i learned about the things that i asked for anyways. Thank you all for the help cause it was honestly a lot of help for me cause i was honestly very confused about obsidian and me being a new player obsidian is hard to get so i didn’t wanna spend an obsidian not knowing what i was doing and pretty much waste it all. Anyways thanks guys i appreciate it!!! Im doing my best to work on a farming build so that hopefully i can start farming and getting enough obsidian lol

A simple mastercraft lesson I learned from @ObiWanKenobi ( good name by the way ) . Take the item you want to craft . Remove all useless stats. Max it’s level with emeralds then max it’s quality with peridots. They are easy stones to find. If using a mythic add it it if your short on space by adding 4 sockets with the stone required and the appropriate mythstone formula. Add obsidian affix the reroll it to perfect with diamonds. After that do as you please

no problem. we have all been where you are at, and eventually you will be where we are!

haha, Emeralds for Quality and Peridots for Level!

one thing to be aware of. when trying to get your affixes to max values, Legend items are better than Normal, Magic, Rare, & Epic. Values wont go below 75% of Max Values when you are trying to get better results, so your chances of getting better/max values are better. when using the lower Tier items, you can still get the max values, but the values rolled will be the full range available. like a 100% affix, Legend values will be between 75-100 usually, but for the others, 5-100 (or whatever the minimum value is). the Item Quality does improve your chances of the higher values for these lower Tier items, but you might end up using more Crystals to get the better values than if you were using Legend items.

another thing to remember, Diamonds reroll values for all affixes on an item, and you have to use this on Legend & Crystal affixes to change their values.

Fluorite changes the values of Normal & Epic affixes one at a time.

so use Diamonds first when rerolling values for Legend & Crystal affixes, and Fluorite second for the Normal & Epic affix. if you do it the other way, you will have to reroll your Normal & Epic affixes again, unless you got really super amazingly lucky and Diamond kept them max!!!

if you have 2 or more Legend, or at least 1 Legend & Crystal affix, because Diamond rerolls all of them, it might take some time to get them all to max. if you don’t have a lot of Diamonds, then just get them all to the highest you can, or the one that is most important to max and the others as best as you can get.