EDIT: for updated build look here (take a look at comments too):

This build was created by @Athena and the only thing I changed was Vial + Vanish -> Bomb + Enigma. [image] Elements are of haste. MH special is blinkstrike and OH special is scalp. Feel free to suggest any changes. I was not satisfied with MH special Throwsword since I couldn’t hit enemy because I’m constantly teleporting. Once i get Eternal pet with flat ED+ or flat HP+ I might make it to top 3. [image] (Btw congrats to M.C.Cuong

) I created this post also because some players ask…

First of all thank you all who help me!

I would like to make a build that @Athena suggested for Top 1 Eternal League in Arena. 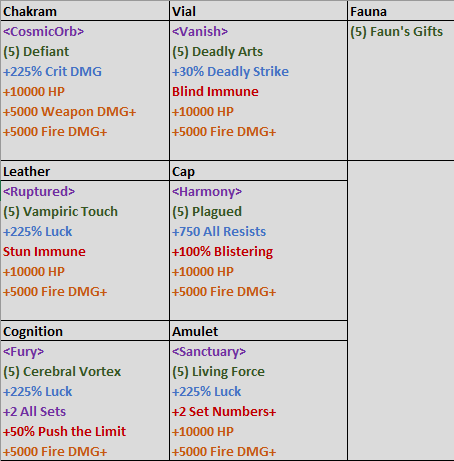 I will be glad for any suggestions

Once more, thanks to @Athena, see y’all in Arena!

Re make it with items that have legend buff 100% DMG or 100% element DMG. Ghost neck has +2 sets and ele DMG aetherial drain has helm and chest eternalized or crystalized have mh I think cerebs ring is one of the only ones that has ele 100% unfortunately

lol yup! go forth my child and shrek ur opponents with this new found knowledge

Lol just deleted the affix and added more HP. Thanks what about root from the trophy… Does this not work?

unfortunately it is bugged and doesn’t :T wish it did it’s the more interesting of the 3 abilities

Yes rogues have ragnarok which is a chakram

I forgot. I don’t even have 1 haha… but my eternal siege weapon was a savage one. I should share that build in the future.

will look forward to it

Hope so IF i could finish that build. Btw which is better stealth proc or 30% dodge?

depends on what you’re doing but in general dodge

Nah dodge is nothing if pack furies falling to your path. anyway what better 100% Element dam or bunos dam that can obtain on glasscannon,push to the limit?

Nah dodge will block any incoming source of damage equally as well as stealth can only activate once every 4 seconds at maximum so using stealth proc is /extremely/ niche as well as for proper application you need to understand the mechanics behind procs and in the situations where it is actually good it is almost always better too just use stealth straight up so dodge is almost always better then stealth proc. For elemental damage vs glasscanon/push/barb it really depends on the build they all stack multiplicatively with each other so a mix is almost always best

Well that was nice that only ever 4 you can cast stealth on procs. Maybe I should switch to dodge someday. Maybe 200% elemental damage and 50% on head and armor and 50 PTL and multi attack on jewelries. I discover something that i can fire five arrows even I have 4 multi attacks and 4 extra attacks. Is this a bug or something?

Well I think I should remove that extra attack to save slot haha.