I am fairly new to this game but I’ve spent hours in testing and playing this build.
I’ve tried several build for warrior and by far this is the one that is most effective in
Battle Arena. Hence, I was able to enter top 20 of Eternal League using this build.

This doesn’t mean that it’s invincible. Sometimes it will require proper usage of skills
and keeping an eye on cooldown and knowing how the enemy AI behaves. And there are
certain builds that works well against this one.

This build is pretty straight forward. You want to avoid being hit as much as possible
and take less damage. You do not want to out trade your opponent thru having higher DPS.

I’ll try to explain this build for newbies, please be patient if you already know what i’m
about to say.

Alright, so after having a chance to play pvp i tried how far this build can go. Even if it’s not yet perfected I breeze through Top 1 of Eternal League using only this build. 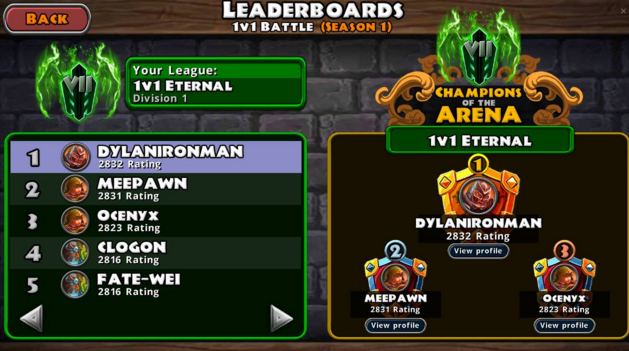 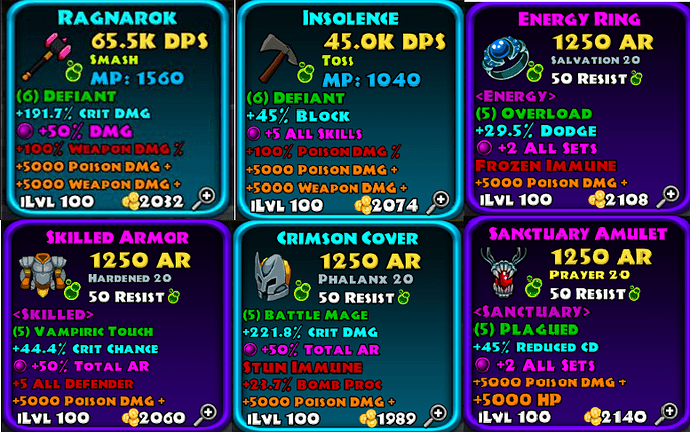 -I had to tweak some pieces of my build. After some testing, I noticed that I was relying Phalanx (% cast shieldwall on block). So, ive added a Shieldwall proc legend affix on my Amulet

-Created a modified Glinting Hammer to get +100% elemental damage

-I got a spare Nadroji armor and helmet, I changed Skilled to Ruptured for bleed damage
and I got blind immune and +100% fire damage

-I switched from poison to fire element and added Inferno Set 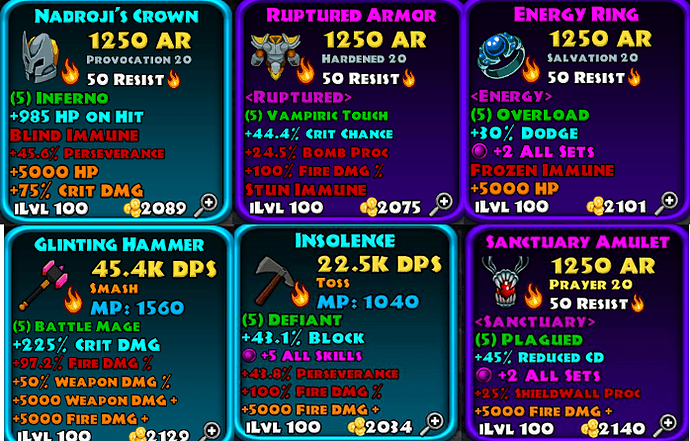 MAINHAND
It doesnt matter what main weapon you have. work on the best item you got with better affixes you’ll end up using Whirlwind and Charge anyway =). It has decent amount of damage with low cooldown.

IMPORTANT
use Amber to change the special skill to Stealth on your off hand weapon.

SET AFFIXES
you want to get all set affixes that gives you additional HP, Armor, Damage and Damage reduction. 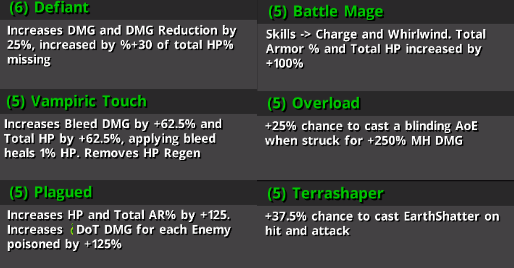 (Terrashaper is from my pet)

With this SET AFFIX you will have enough HP and Armor so that you dont have to waste
your crystal affix and affix slot per gear in getting HP and armor. It also gives you enough
damage scaling.

BATTLE MAGE
Wizard exclusive affix. convert using Jasper
as a Warrior being melee is a disadvantage so you need to have a way to get in range. Charge
will be very useful to get near your opponent AND get out of their range. And you would still want
to use Whirlwind (it has a decent damage scaling) regardless of what type of mainhand weapon you are using.

OVERLOAD
this is one of my favorite. First, this is a Rogue exclusive set affix, farm for a gear with this affix
and convert it to a warrior item using Jasper crystal. This is one of your core Set affix, it triggers
blind and inflicting damage to your opponent (it criticals too) when they hit you.

VAMPIRIC
+hp, +bleed damage and heal? why not? this works very well with Hatchet skill Toss that has
% chance to cause bleed.

TERRASHAPER
earthshatter’s damage is 800% of Mainhand weapon. Activating this skill while being hit or when you attack is massive. This is one of your main damage source in fight.

PLAGUED
one of the most efficient set affix as it boosts your HP, armor.

-not because you have Plagued Set you are bound to use Poison. Use Fire in PVP.
and get Inferno Set Instead of Rage.

SKILLED
you benefit from it all the time. It’s still a preference. Brutal is a good choice if you have dealy strke affix

ENERGY
for this particular build, you wont benefit from putting mana related affix or points in stats or Intelligence. However, you will run out of mana during fight. Energy solves that and gives you
+100% damage at full energy.

SANCTUARY
this can turn around the outcome of the fight, prevents very high damage opponent from 1 shotting you. In some situations, this will give you enough time to have your skill cooldowns ready.

LEGEND AND OTHER AFFIXES

For other legend affix and Epic affix, it’s a matter of preference and how you want to tweak this
build. I want to have that 5000+ elem damage in every piece to increase my damage. The rest, is up to you.

Here’s your Stats after this build 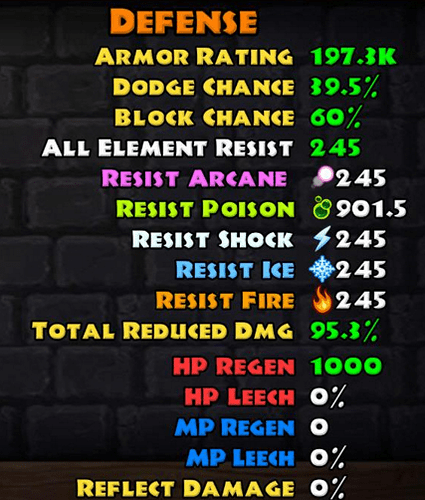 VS SPELL CASTER WIZ
-use Toss to apply bleed. Charge > Stealth > Whirlwind. Earthshatter and Overload will do the rest. Oh wait not dead yet. Charge out > Toss while waiting for Stealth to go in again.

VS OTHER WIZ
-they’ll die no matter what you do. Have fun

VS ARROW and GUN ROGUES
-these usually have very low HP, do whatever you want. OR just stand in front of them and let
the on hit procs kill them

VS BLINKSTRIKE
-your worst opponent, especially bleed type damage and blind immune. This is where your knowledge about their AI setting cooldowns when to go in and out will be needed most. Have fun getting killed. lol

-you will have a better chance of winning if you switch your off hand weapon to Totem.
top players would probably but very unlikely to have all 4 immune affixes. Fear Immune
is one of the hardest to find of the 4. If, they have Fear Immune most likely they dont have 1 of the remaining 3. Max your Fear skill points, create a offensive Totem to increase Fear damage and use Stealth. Spam fear with prayer to kill them.

VS BLIND IMMUNE
-very challenging. Use your stealth, dispel wisely.

VS WARRIOR
-Boring. long fight. Bleed type can kill you. Warriors with HP on hit are tough to kill and can kill you. Use stealth to remove bleeding. Stay out of range and use Toss.

P.S
I think there’s only about 10 warriors in Eternal Leagues. I think people dont play warriors in pvp because they think other classes are better and no other guides in forum other than farming warrior build. I hope i’ll see more warriors. Let’s kill those Rouges.

DO NOT COPY EVERY AFFIX. I ENCOURAGE YOU TO EXPERIMENT. YOU MIGHT
COME UP WITH A BETTER BUILD.

Moving this to Guide section, hope you don’t mind.

Nice build, easy to read and complete with detail. Hope this build can help give inspiration to other newcomers to make their own build.

@Refia can u help add this build in build compendium. DQ Builds Compendium [2.1]

What nature do you use ?

I use Element to get 5% element damage

I think you should use ZEALOTY SHIELD for +30% DMG and 15% MS.
Use Equivalence + Harmony for dmg reduction and + MP
Add BLIND IMMUNE AFFIX from NARODJ HELM

Question you updated it an said to use inferno set, could you explain what you mean. I have a full inferno set.

I changed the element from poison to fire. Initially I planned to use poision because of plagued. After some testing I decided to change the element to fire and Inferno set increases fire damage and dot time.

+1 nice build update keep up the good work brother but how about your AI setting?

I dont really worry about it. With this build and skill type and execution the real player will most of the time win. So, best thing to do is create another defensive char. ^^

This build has given me some ideas towards creating my own build. Very well written with great detail.

Question One is regarding your fights against the Camp and Shoot AI. I am specifically referencing this statment:
“”“VS ARROW and GUN ROGUES
-these usually have very low HP, do whatever you want. OR just stand in front of them and let
the on hit procs kill them”""

I tried a BlinkStrike build and a Charge Build using something similar you have set up above. My experience was that once I am in, they have so many procs and leeches that I frontload as quick as possible but seem to always get snagged by their high damage prior to being able to get out quick enough. I have had a lucky win or two. How do you survive long enough to live through all that damage they have? (The ones I face are usually sitting around 400 to 500 power +)

Question two regards your Immunes. Did you get those on the gear or did you apply a random legend to get those?

Nice build and grats on making Number 1. Im close to being Eternal but I am afraid probably not skilled enough to make to Number 1.

Those immunes are found only on certain gear. I don’t recall the Frozen Immune one atm, but the Stun Immune is Crimson Cover specific.

Impossible to get via Ruby.

Frozen Immute (Viable to get via Ruby)
Certain Item have it like frost raven ring (All class), mostly on item based ice element like permafrost and frozen set.

@Knutz
You need to have those Immunes ^^
If I understood correctly you are using blinkstrike and not whirlwind?
If that’s the case, I your build wont be as much as effective. Blinkstrike
works the way it is now because daggers have quick attack as primary.
But if you try to replicate it for a warrior with Charge it wont be effective

OK… I’m beyond frustrated at the moment so forgive me. I appreciate the help. Salute to you.