Tip for leveling from 1-50 in one floor, any Ascension, no Quest Mythstones necessary

Hey guys, just thought I would post a tip I’ve found extremely helpful in getting me through all the leveling after ascending. Like many of the nuances of this game, I stumbled on this accidentally

You’ll go from level 1-50 in one map, faster than other methods I’ve found on this forum (though I haven’t done an extremely thorough search!) and it’s also a relatively fast way to help get even back to 99, though that will take a bit more time.

There’s one requirement: the character you want to quickly level up must already be level 99. So, basically, you have a level 99 character who is ready to Ascend and you want to get him/her to level 50+ ASAP.

P.s. I really apologize if this tip has been posted elsewhere, I wasn’t able to find it as I was searching through the forums when I was previously looking for leveling tips, though I did find info on putting Quest Mythstones in lvl 1 gear etc.

Also, it doesn’t matter what Ascension you’re on, first one or 7th, you’ll still get up to ~50s in one map.

Here’s how it works:

Side tip: Kill every enemy minion on the floor to make the most out of this method. Your hireling will level up much slower after you move on to the next map / floor. However, future floors using this method are still pretty fast and I do all my leveling this way, 1-99.

You get max Experience beginning at floor level 101 for any given difficulty, so the Exp amount you’ll get for floors 101-200+ are all the same.

But that’s not the only reason I’ve found for choosing level 101. For some reason, levels 101-110 appear to always have very narrow hallways throughout the level, with a minimal number of large open spaces. These large spaces / living rooms take longer to farm as you have to encircle the whole room catching minions. For whichever reason, 90% of the cartographer floors above the 110s seem to have many more of these large open spaces. I don’t know if that’s 100% true but it’s just what I’ve noticed. The Hallways in the low-100’s make for very fast clearing though as the narrow-er passageways work to squeeze and condense the minions together for your farming entertainment. I’ve generally found this effect to be extremely helpful, especially if I’m using KnightsCharge, Whirlwind, or some other narrow AoE skill on my main character. 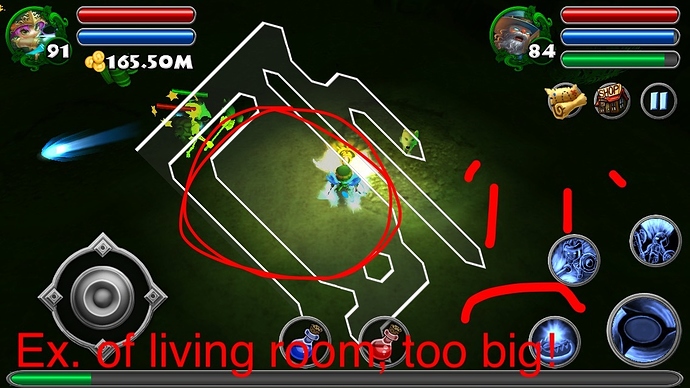 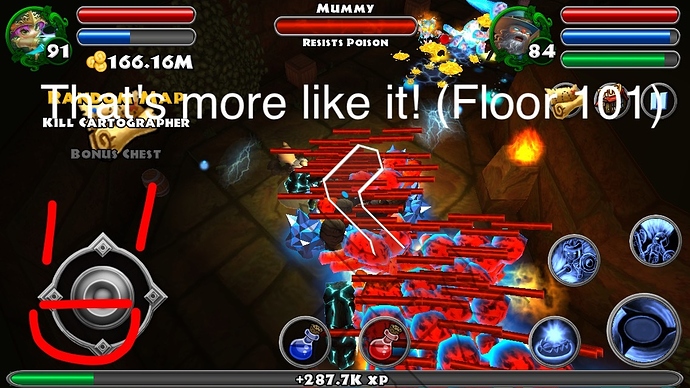 Last tip - although Quest Mythstones and Experience Shrines aren’t needed for this, they would super charge this method. Especially if you have the Enshrined Ascension Perk active! If you have plenty of Zircon Crystals and Quest Mythstones you can put them in your hirelings lvl 1 gear to really get them going.

Hope this is helpful to someone. Love you guys

Thanks for the tips man, I’m in my second ascension and your tips help me a lot

Happy to help my friend

Does Jesus really save, though? I mean, he does a nice job on my garden.

Tried it today, got about 20 levels the first map, no quest runes. Either I did something wrong or something has changed since you last did this. Took me about 15 maps (floors 201-215 M3) to get level 50. Nice suggestion though.

@stryder make sure you’re on levels 101-110 hopefully that will help! The lowest I’ve gained through this was 35 levels, but when you move on to the next floor it will be much slower. I always stick to 101-110 M3 though and get to 50 easily

Edit: the lowest I’ve gotten in the first map is actually to level 37, on Eternal Ascensions on both my Mage and Rogue

Have tried it many months ago (before this was posted) and I could say this really works. Well, to me I did’nt rely on this technique cuz I already have a fulll farm set for experience only (for Ascending) This tip is really good for those who are lacking resources (mythstones that is needed for building a farm set experience.

Also don’t forget maps with packsize +100% or higher. Exp will skyrocket with that mass of monsters.

Hi guys, I did exactly what was mentioned above.

1: make dps main character and ascending character to hireling.
2: go map 101 m3 and get a challenge map for 101 m3
3: open the map then ascend the hireling
4: start the bloodbath.

Have i miss any steps?

Your help and advice will be greatly appreciated .

Leaf, I hope you’re well. I can’t say exactly what the problem is, but there is likely something missing. Here’s what I’d recommend:

Yes, as I had mentioned in my post and what you had just replied. It looks pretty much the same. Only difference is my hireling didn’t die at all in both the tries, probably its at 101 m3. Both maps aremail done above 140% packsize which is 10% or 20% additonal then your guide.

ya dis is my fav method i was doin dis since 2.0 too 101 is my fav map to grind xp … in lvl 1 i would use ice mh wep (very easy mode) den kill mobs 1 mob gives me like tons of xp at low lvl den i inc the difficulty lvl as i go lvl up higher… nc guide though

Hi Roy, are we speaking the same language? Here we are talking about xp with hireling as dps however your reply sure make me feel that you don’t know what you’re talking about or even understand the conversation before jumping in to comment.
No offence, i do appreciate that you bother to say something but please understand the conversation before commenting.
Irrelevant comments will lead to misunderstanding and wastage of bandwidth.

Does this method still work, or is there a better one out now? If it does, is floor 101 still the best, or have they raised XP gains on higher floors?

I once used my skullshield trick on wiz to quickly gain levels upon ascending.

I just let my wiz go lvl 99, activate my skullshield wc does a 3b dmg per hit(deadly strike of sureshot)

Ascend the wiz, and walk through enemies… lol

Wow that’s similar to one of my guides but it’s extremely helpful . Still the only difference is no quest stones.

I do think it’s much quicker with quest stones though and it definitely makes a massive difference by months or so as well as time invested. Although if it’s level 1 to 50, it’s not always a big deal if you know what you’re doing but it still definitely speeds it up.

Doing Solo Mode EXP Gain on floors like 101 is great for packsize and for levels 1-50 and higher.

I do remember the good old days of being able to get above 1k% EXP Gain but understandably it was too OP so it’s nerfed.

Then there’s Nadroji bonus, 140%+ packsize or so and then crammed rooms like @JesusSaves mentions. Floor 200 was great for me simply because the packsize is great as well as EXP Gain but I guess floor 101 might be better in terms of crammed spaces but of course I never thought that far.

How do you break the barrier the first time? It seems it’s a vicious cycle: need crystals/mythstones to make sets, and be able to farm more XP/crystals/mythstones. But if you don’t have any in the first place, it’s a tall order for someone like me just starting out. Not sure on what the best strategy is at my current level.

Lastly, where do you get these sets like epiphany, cryastalized, etc…? Can I craft them eventually when I have CS/MS, or do I need to farm above a certain floor for them to drop?