Hi me new user in game

who can give me a good combination of mythics set for roub of 1b dmg + _pliz help me:heart_eyes:

my advice is to do a search on Billion Damage or Rogue Build to find one that does Billion Damage. anyone who helps will just send you a link to one of those posts.

Mythic Items are items with Mythic Affixes. they are created by using a recipe of four Myth Stones to create a Mythic affix, which makes an item a Mythic item. read the Mythic section of the Codex and Codex/Dictionary to see which ones would be helpful in increasing damage.

I spent time and effort to get my own Wizard to do a Billion Damage. I read other players posts to see builds they made, or advice they shared, but it was up to me to get there. if you want a Billion Damage Build, you are going to need a good Farm Build to get the things you need to make it.

lastly, welcome to DQ Forums. I hope you are able to make that Billion Damage Rogue and share it with us so that we can all see how cool DQ really is!

oh, well, that is different. because I am stubborn, I didn’t want to use other players builds, and wanted to see how far I could go with my own ideas. but a lot of what I know is from builds and ideas shared by other players, so that saved me from making a lot of mistakes and wasting Crystals. I stopped climbing floors for awhile to get 3 of my Characters to level 99 for use in PVP, and am now Ascending 2 more Characters for them to have all 6 Perks. it is a lot of work, but I am learning a lot. I used Wizard a lot, so I have a lot to learn about Warriors and Rogues.

I had totally messed up my Pure Crushing Flames Build, and my Reflection Farm Build wasn’t meeting my expectations. so I pulled out an older Farm Build I had, and noticed it had too much Luck, so I pulled it out, and. . .put in Glasscannon! wow! big difference! I was slowing down around floors 900-920, so this was a good thing. then I took out 2 Twister Proc’s and put in 2x +10 Amplify, and now my 30% Deadly Strike is getting a few Billion Damage hits. I have gotten a Billion Damage with Crushin…

after I posted this, I have climbed to floor 980’s M3, but I wanted a Farm Build that could do well at floor 1,000. then I would know for sure it could farm great at floors 510 or lower. that would make it easier to get stuff for when I climb floors 1k+, 2k+, or even higher.

does this build still do billion damage in 2.0? and what is the stat distribution?

I think its not hard to get 1b++ damage on bow rouge. Even a level 30 toon with magic equip can do that. The trick is you have to gather enemies closer. I mean lot of them, preferably melee… Then make sure you have added a skill points on guidedshot… Then when you fire the shot… Every pierce on enemy adds damage depending on your damage per pierce on guidedshot rank level… When your damage outreach billions the number indication will be… 123564785 damage

… Shame its rogue but im bored out of my mind

Basically your a ranged fighter since you use bow, so do you need HP? And id recormend on amulet and ring, changing the +20% ED for +2All sets for a total of +8 inferno (id recommend less and using say vamperic touch and adding bleed damge into the build) substantially increasing damage. Also on the other gear change the HP/ED% into blistering to increase damage even further. Also test other source…

here are a bunch of posts talking about Billions of Damage for rogues. some of the builds are old and might need some tweaking because of Patch Updates, but hopefully they will help you reach your goal of a Billions of Damage Rogue.

I used to be like that too, but thanks for linking these useful posts.

I was always afraid of not having enough HP, but I recently made a 1 HP Wizard with 2x Glasscannon. it kind of sucks because it has some Reflect Damage in the build and also Mana Shield, which kind of defeats the purpose of having 1 HP in the first place. this is also a Farm Build, so it farms good, but it is slow. but I learned a lot for builds I Craft later.

there are so many combinations in DQ that it is kind of hard to choose just one. I think some players end up making that one good build and then are done, but I keep coming up with ideas with different combinations of affixes to try and want to see how they do.

@Mr_Scooty kind of says it best. look around the Forums for ideas, write it down on paper to see what you can fit on your Gears, and go from there. about half of my builds I made then tweaked, and the other half I wrote them out first before building them, and tweaked them later where it was needed.

you can boost damage directly, like using +100% Weapon Damage (increasing the damage of an attack), or indirectly for DPS, like using +15% Attack Speed (attacking two times a second instead of once). here is a post that should help you when you use Crystals. 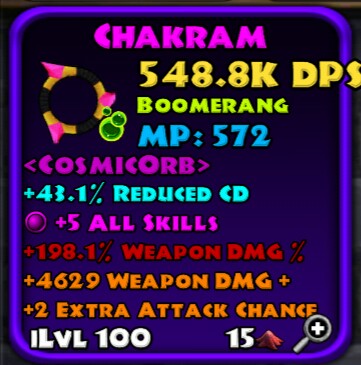 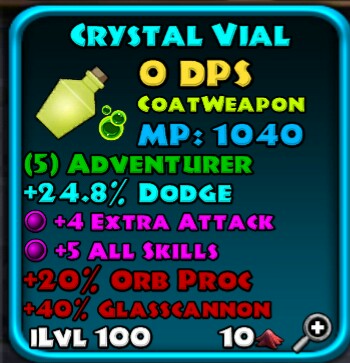 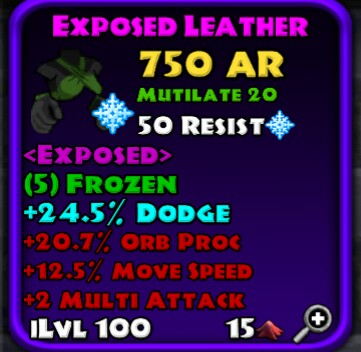 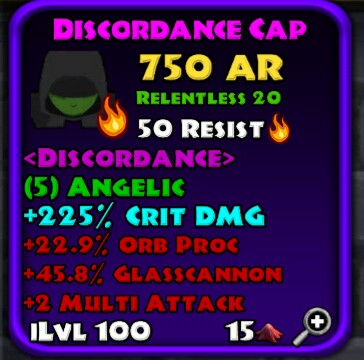 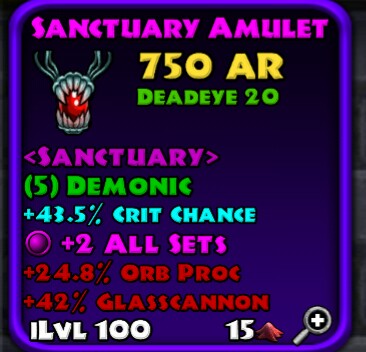 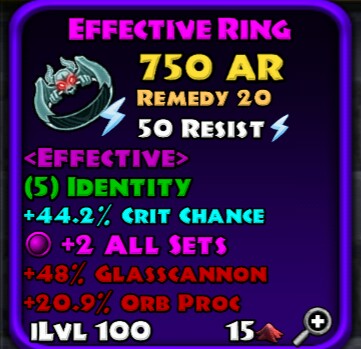 that can recommend me

Too much glass canon on ur item, just need 100%(2 affix), change with other affix, i rrcomend to use permafrost instead arcanist, since u have frozen… and change all ur elemtn to ice

if you can put another Legend Movement on your gears, Jasper your Chakram to Warrior, put Momentum in the space where the EAC was, and Jasper back to Rogue.

since you have Effective, maybe replace one of the Crystal Crit chance with a Crystal Weaken. if you use Ignore Resist instead, don’t use Weaken and you have to get rid of Effective, your choice.

Frozen Set useless with Poison Weapons. either you need Ice Weapons or Ascendant Set on your build.

if you want more survivability, change a Crystal Crit Chance to Dodge, and the Dodge on your OH change to Crystal Block. if you put all your Stat Points into Power, you only need one Crystal Dodge and can now have a totally different Crystal affix. (Rogues get extra Dodge for putting points into Power).

hope this helps a little bit. make sure to check the affixes on your Pet, since changing those are expensive in Crystals. 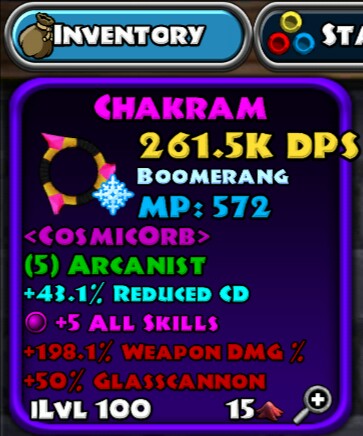 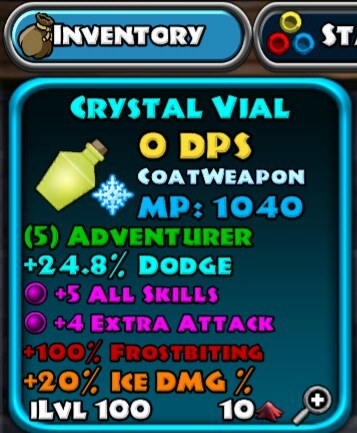 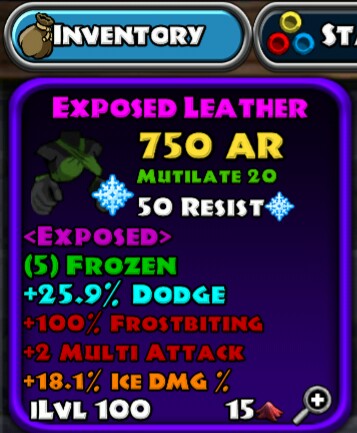 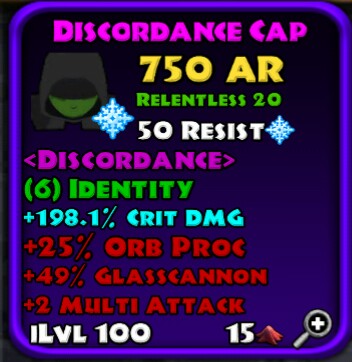 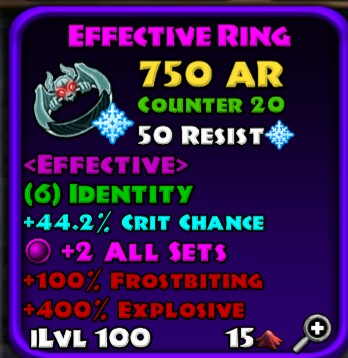 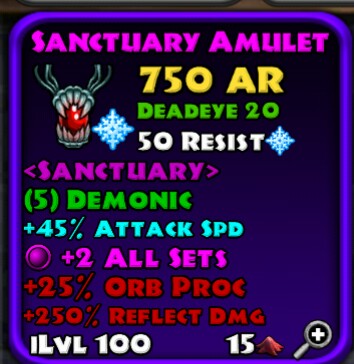 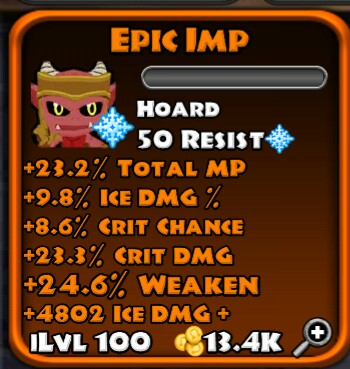 What do I recommend now?

the Ice DMG% are good for now, but later there are better options for more damage and survivability. I would put another Epic Weaken instead on your Vial and Leather. this will give you up to +90% Weaken that will give you a noticeable difference in results. the one on your Pet is giving you a 30% chance to reduce the monsters Resistance 30%.

Counter Talent with Reflect Damage is a good idea, let your Dodge do damage

Arcanist Set requires the Ascendant Set, or it doesn’t work. right now, Arcanist is giving you +20% Elemental Damage for every enemy that currently has the Arcane Debuff, but you need the Ascendant Set to put that Arcane Debuff on your enemies. so Arcanist is giving you +0% Elemental DMG right now. maybe replace one of your Identity Set with Ascendant to make it work. doing this will also give you the Prismatic ability, but as long as you leave your weapons Ice, most of your attacks will be Ice, with the other attacks randomly being Poison, Fire, and Shock.

that is so not true!

thanks bro golem recommended me the same

what I read is that Ascendant gives an Arcane DoT (Debuff over Time) that lasts 5 seconds, and that the ED from Arcanist lasts 0 seconds, which is why you need both. I think the Ascendant DoT puts a Weaken on enemies for the duration of the DoT and Arcanist adds a DMG component.