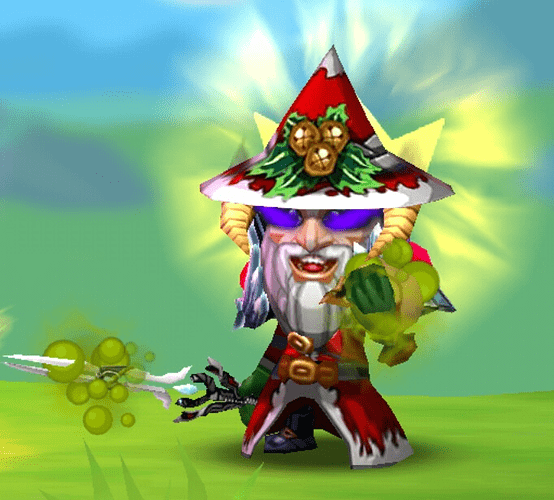 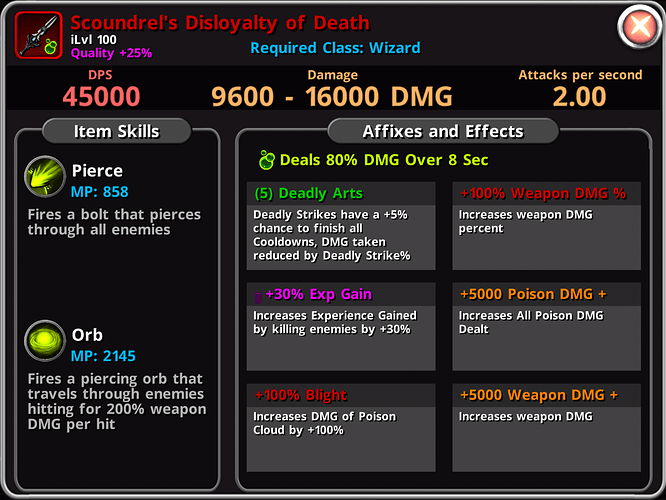 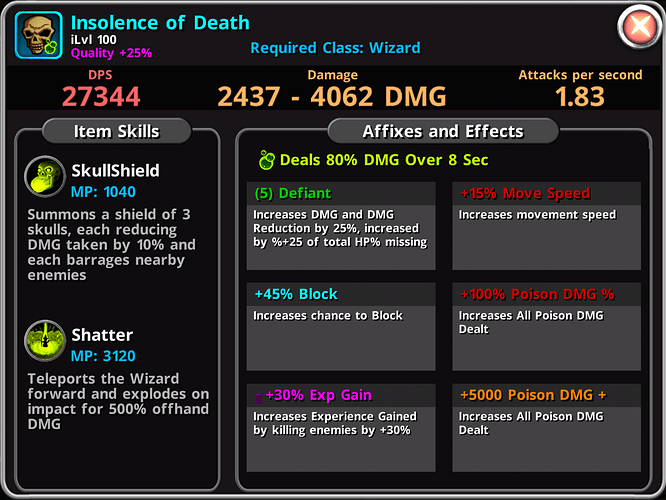 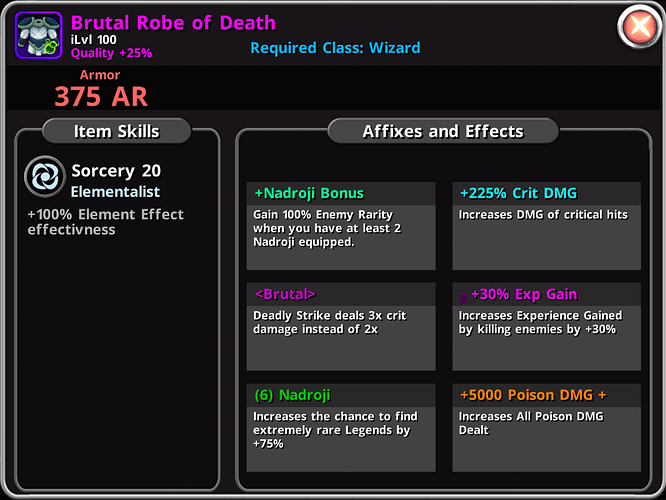 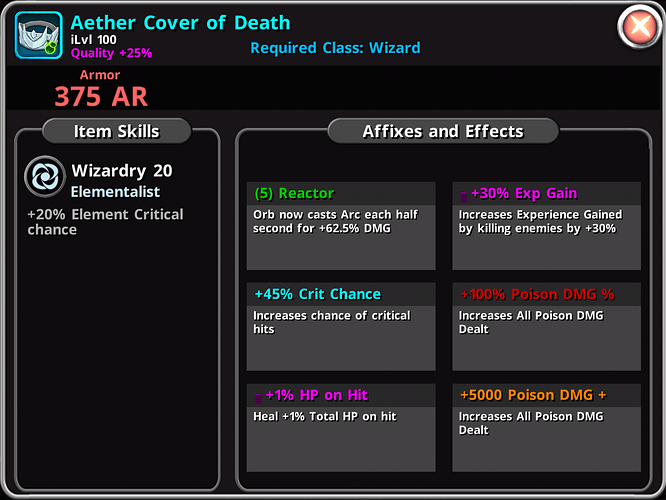 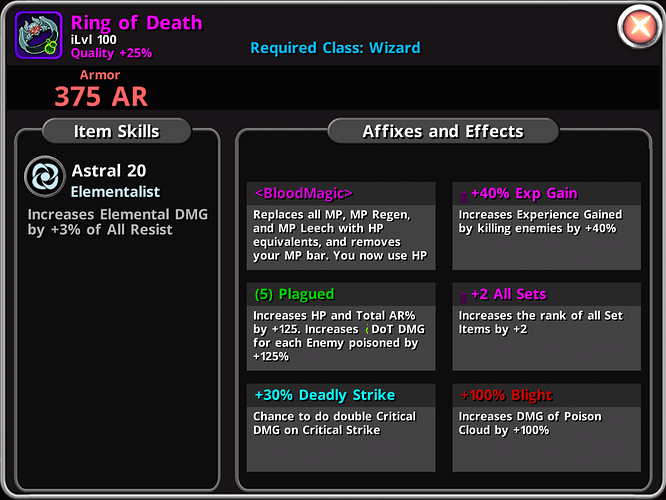 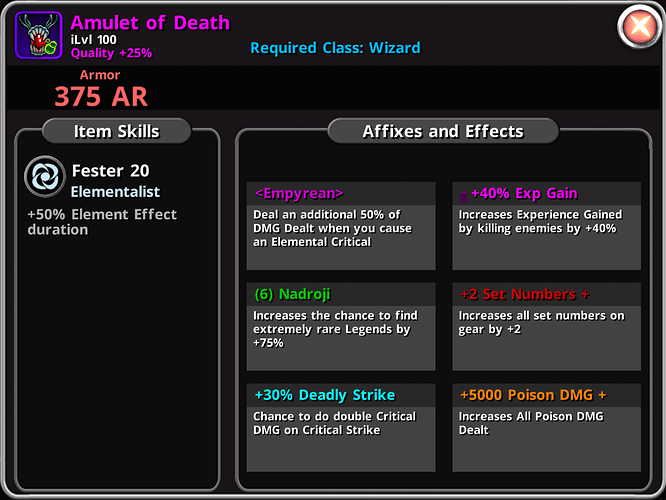 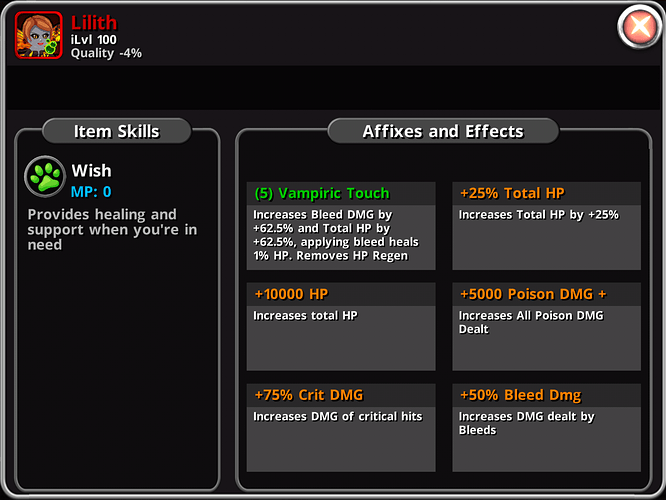 These are our set affixes and why we use them:
Reactor: reactor is your key component too making this build function as ridiculously efficiently as it does those arcing beams make it so that you have too do drastically less work too kill everything on the floor
Deadly arts: if you are an old player you have probably seen this engine before however if you are a new player deadly arts is here because if I have 60% deadly strike I now have a 60% reduction in the damage I am taking as well also if your fighting nalot of enemy’s you can drastically increase your damage output because it will make your spell’s spamable
Defient: extra survivability and damage sign me up
Plagued: if your an old player you know exactly why this is here if you are new however this one is extremely important you use it for a butt load of extra HP and armour and you will see it used for this in a ton of sets that don’t even use the poisen part and then if it is a poisen build like this is for every enemy that you have poisen dot on you get a 125% boost (if you have +4 all sets) too poisen dot damage which in this build makes it so that if you have a mythic enemy with poisen resist and all of the hp and defensive affixes spawn you go and get poisen dot on 50 enemy’s and it’ll die instantly anyways
Nadroji *2: nadroji is useless on this build but the conditional affix you can get on the chest or head pieces will give you an additional 100% enemy rarity which will buff the chance for magic and rare enemy’s too spawn and they give you more XP per kill then a regular rarity enemy

Now onto our mythic affixes:
Bloodmagic: again older players you don’t need the explanation however for new players this makes it so that our HP and resource system are the same so you won’t need too worry about the cost of casting as well as adds a damage bonus
Brutal: this one is very much a toss up between brutal and ruptured I went with brutal cause that boost too deadly strike damage it provides is usable in the largest number of situations with out a change too the build however if you wanna swap an affix out for bleed chance and put brutal on then go right ahead
Empyreon: this boosts damage dealt when you cause an elemental critical you will cause an absolute shit load of elemental criticals

Crystal affixes:
Crit chance: damage buff plane and simple
Crit damage up: more damage
Deadly strike chance *2: a way too get more damage that can then be converted into defensive capability
Block: if you aren’t making use of pathfinder it’s a better version of Dodge

Other affixes:
XP gain *6: it’s an XP farm build come on do I really need too explain this too you OK fine it reaches the XP gain cap of 200%
+2 sets *2: if the build you are doing does not involve the 7 deadly sin items this is a must it makes all of your sets drastically more powerful
Blight *2 (when you are applying this with a ruby it will be called “elemental crit (dmg)”): this buffs the damage of your poisen clouds
100% weapon damage and +5000 weapon damage: you want these incase you get that one map where all the shrines are the last thing you encounter and you end up with a legendary/mythic that is the only enemy in the map
15% move speed: with 20 ranks in the dexterity heroic skill you end up with 25% move speed which just lets you clear faster
200% poisen dmg: this is a poisen build it boosts your damage significantly
As many affixes as +5000 poisen damage as possible: poisen build all of your poisen damage is gonna get that plagued bonus

Nature’s: use of death it is a 2.5% chance too crit per piece so you will reach the crit chance cap of 60% just perfectly

Heroic skills: you will want 20 in strength and 20 in Dex if you’re using a wizard 20 in intelligence will also be useful other then that do whatever you want with them

Optional affixes suggested for the warrior or rouge:
Elemental crit: you lose the piece of gear that just straight up gives it too you because you aren’t a wizard just take off 1 of the +5000 poisen affixes

Some basic tips that will make your life easier when levelling even if you aren’t using this build:
Take the enshrined perk I am not kidding this is the best perk for XP farming XP shrines go beyond the 200% cap and they get multiplied by your current XP% with the enshrined perk you get 500% bonus XP upon using an XP shrine and you now have 2 chances for that too happen
Do not and I repeat do not reset for an XP shrine though if you adopt this play style it will slow you down enough too make it less effeicent and more expensive I tried it for 1 ascension and every ascension after proved it’s lack of effectiveness
Take the hunter ascension second seriously not having too use the hunter ring will make you love life again
When going from 1-50 buy a legendary sword from the shop equip it the apply peridots until it is level 100 reach level 10 specing entirely into mana and go too floor 200 and get yourself a pack size map orb is a dps God if you are a rouge or warrior buy a hammer or chackram and apply amber until it has orb and do the same thing
When going from 1-50 on some of the higher ascensions quest mythstones and zircon are cheap as of this update do not torture yourself it isn’t worth it
+% pack size maps are your friend it is in your best interest top larimar till you get one
Do not use an enemy immune map it just isn’t worth it you become so much weaker when you change elements most of the time this won’t apply cause they won’t be your element but that 1 time they are not will pain your soul

Pet: the pet shown is in no way a requirement you will want a Lilith when you level a rouge too eternal because one of their pieces of gear gives a chance too bleed. the pet is just up there because it was a stupidly lucky pet and I use it so I put it up

(there is an achievement and I want it : P)

Update: I decided on a name for the build so the title has been changed accordingly

32 Likes
How to level up easiest way possible [guide]
Eternalized Set
DQ Builds Compendium [2.1]
Could anyone give some suggestions for wizard build
Best way to farm gold?
Skaul's Hierarchy of Tips and Tricks [SHTT] [2.5]
Need help for newbie
Wizard Build [EarthShaker] [PVE or 2V2 PVP] version 2.0 with Video
Just started
LoH vs Life on Hit:)
? On asending
What floor are you nah guys me i stuck in 890 floor
Noob needs help :)
Eternal weapons
Griffin March 3, 2016, 8:59am #2

Too difficult to even type them all. Lmao.

Blight is infinite, yeah. I didn’t read the whole thing.

Well you skip a very important part, leveling character to lvl 50 to be able to wear lvl 100 items.
So here is a tip:
With lvl1 character u can buy cheap items (lvl 1) from shop (weapon \ offhand \ chest). You need items with socket, where u will add +exp mythstone.
To get helm \ amulet \ ring lvl1 with socket, there is a trick. While you cant take off base gray lvl1 items, you can lvl character a bit, so you will be able to find and equip such items. Then modify those basic gray item in your bags.
I have all 6 lvl1 items with +exp and my hirlings lvl me to 50 pretty fast. 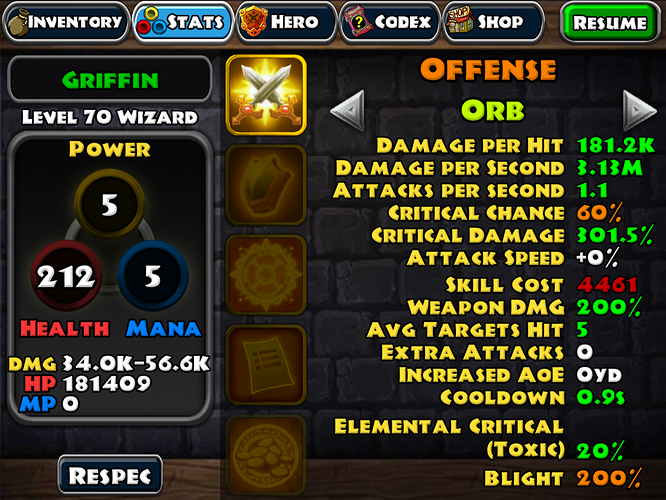 Nope : D it’s in there I don’t blame you for missing it though it’s OK it is a wall of text

OK yeah guys thanks for spotting that I just went and tested it out and yes it simply displays the capped colouration but that is not the cap will update immediately : D

As far as I have observed the exp I got from Floor 200 and Floor 300 is relatively the same so I think Floor 200 would be the best place to grind XP if what I said is right.

Did you get that Scoundrel’s Disloyalty drop around floor 200?

No actually I got a bunch of them (including 2 eternal ones LMAO) at around floor 500 on my crystal farm build however past floor 250 on any difficulty you should be able too get them and they drop ridiculously often they’re like the new satyrs spirit equipment of drops hope that helps : D

This is your main char sir ? What is the real build name ?